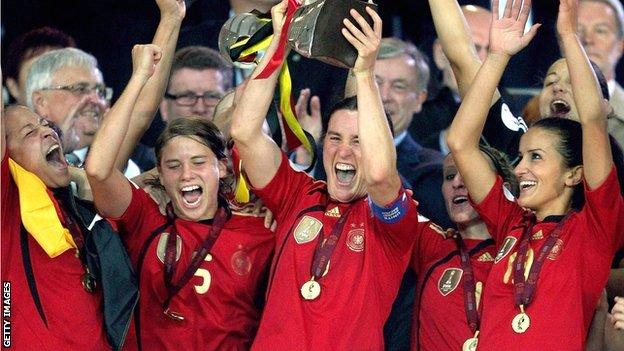 The 2013 Uefa Women's European Championship kicks off in Sweden on Wednesday with England hoping to improve on their performance four years ago when they lost to Germany in the final.

The Germans have won the last five tournaments but have suffered injuries to several key players, thereby offering the other 11 teams an opportunity to end their rivals' dominance.

France, England and the hosts will head that chasing pack. Three groups of four teams will battle to make the final on 28 July, with the top two in each group being joined in the quarter-finals by the two best third-placed teams.

But what can we expect from the 11th staging of the tournament?

If history, the Fifa world rankings and bookmakers are anything to go by, Germany will start as clear front-runners.

It is little wonder. Seven of the 10 European Championships held so far have been won by the Germans and they are Europe's top ranked team, second in the world behind the United States.

But coach Silvia Neid has had to name a young squad after six players were hit by injury in the build-up to the tournament. Germany have also had to deal with the loss of prolific striker Birgit Prinz, who retired after the 2011 World Cup.

The Germans still have a massive goal threat in Celia Okoyino da Mbabi, and, having lost in the quarter-finals at the World Cup two years ago and having failed to reach the 2012 Olympics, Europe's powerhouse will be determined to reinforce their previous superiority.

"No-one will write off Germany and I think they will have something to prove after being knocked out of the World Cup and not making the Olympics," says former England captain Faye White, who will be a BBC pundit during Euro 2013. "They have always shown they can bring through new players and sometimes show they can be better than the ones before them."

But Sweden's star forward Lotta Schelin says: "You don't get the impression that Germany are as unstoppable as they used to be, and that's positive."

Hosts Sweden, ranked fourth in the world and second in Europe behind Germany, will hope home support can boost them to greater heights than third place in the 2011 World Cup.

They will be aided in their quest by Swedish coach Pia Sundhage, who led the United States to the gold medal in the 2012 Olympics and won the Fifa women's coach of the year.

England midfielder Anita Asante, who plays for Swedish club side Gothenburg, says: "Swedes are very passionate about the game and the domestic league is well supported with big games hosting 2-3,000 supporters.

"No doubt they will have the whole country behind them, so they will be strong contenders."

France are hotly fancied after fourth spot in last year's Olympics and the 2011 World Cup and, with nearly half of their squad playing together at Champions League runners-up Lyon, they present a formidable unit.

England, runners-up in 2009, will hope to at least make it past the last eight - the end of their journey at the World Cup. But with several injuries to key players such as striker Kelly Smith, they may need inspiration from one of their rising young players.

Who are the potential stars?

If Sweden make an impression in this tournament, then it is likely that forward Lotta Schelin will have played a key part. Schelin, 29, plays for one of Europe's strongest club sides, Lyon, and recently surpassed the 50-goal mark for her country.

"Schelin is a phenomenal goalscorer but I found her one of the hardest forwards to mark because of the timing of her runs and her ability to play on your back shoulder, just where you hated them to be," says White. "She makes the game look so elegant in the way she plays with her touch and her ability to nip past players.

"I think she will be able to handle any home pressure and the team will look to her."

Despite their injury woes, Germany will field a young but strong side. Midfielder Kim Kulig and striker Alexandra Popp are among the biggest losses, but Celia Okoyino da Mbabi scored a record 17 goals in qualifying and team-mates Fatmire Bajramaj and Dzsenifer Marozsan will attempt to provide the ammunition.

Witnesses of England's 2011 World Cup quarter-final defeat by France will know that Louisa Necib and Gaetane Thiney can cause all sorts of problems with their ability to find space between opposition defensive lines and midfield.

"I always look for Necib," White admits. "She is very elegant and technical and always seems to have time on the ball. I think she is more effective in the middle, but she plays out wide because they have such strength there. Necib's Lyon team-mate Camille Abily plays behind Marie-Laure Delie and has made a big impact in past tournaments."

England midfielder Sue Smith, who is also part of the BBC's team throughout the tournament, also believes one of her previously unsung team-mates may emerge.

"I think Anita Asante is one of the most under-rated players around. I've played with her for years and she is always there or thereabouts and I think this will be her tournament this year.

"The fact she plays in Sweden will help her and she knows the style of play if we face Sweden and knows what the pitches are like and I think she will be a shining light for England."

Meanwhile, England's Jordan Nobbs and Toni Duggan have impressed White and she believes they could both make an impact at Euro 2013.

"Jordan is a bundle of energy," White says of the Arsenal midfielder. "She has a very good head on her shoulders in terms of confidence and wanting to go out there and express herself. She will not be overawed by the experience if she gets a chance."

Where are the games and will they sell out?

Euro 2013 will be held in seven cities spread across the southern region of Sweden between Gothenburg and Stockholm.

Gothenburg, Halmstad, Vaxjo, Kalmar, Norrkoping and Linkoping will all host group games with the final being held in Solna, in the suburbs of the nation's capital, Stockholm. 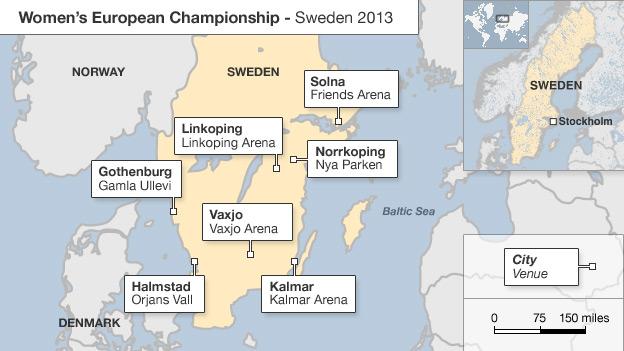 Uefa has specifically chosen medium-sized stadiums for the tournament, giving venues the best chance to reach their capacity.

They range from Orjans Vall in Halmstad and the Linkoping Arena, which hold 7,500 spectators, up to Nya Parken in Norrkopping (10,300), the Kalmar Arena (10,900), the Vaxjo Arena (12,000) and Gamla Ullevi in Gothenburg which can house 16,700 and will feature two of Sweden's group games and a semi-final.

The final will take place at the Friends Arena in Solna with a capacity of 30,000. The venue was opened in some style last November when Swedish striker Zlatan Ibrahimovic scored four goals against England with a memorable bicycle kick among them.

Uefa says ticket sales are going "very well" but that there are still some available.

Asante says: "Swedish fans are really respectful about the women's game; it's not really about the difference between men's and women's football, it's about the athlete and if the sport is entertaining.

"They will really take to the English team because many Swedes support men's Premier League clubs and once they hear that girls play for Arsenal and Chelsea, they will be even more excited to come and follow our progress."

How can you watch it?

BBC Sport will be providing more coverage of the Women's European Championship than previously.

All England's games will be live on BBC TV, Radio 5 live or 5 live sports extra and the BBC website with 16 games overall shown live, 14 on BBC Three and two on BBC Two.

The rest of the highlights will also be shown, so you won't miss a goal, while the BBC Sport website will be right across all England's games meaning you can follow the key action if you are out and about via your phone.