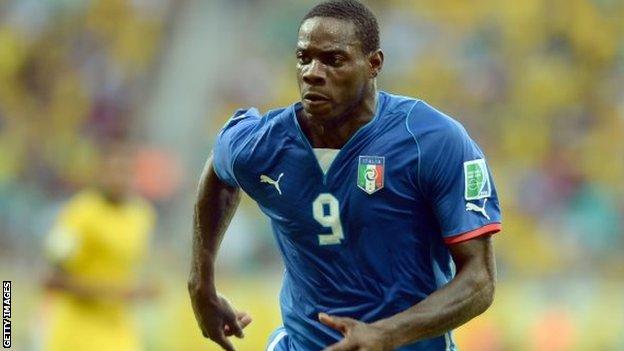 Italy striker Mario Balotelli has been ruled out of the rest of the Confederations Cup with a thigh injury.

He played the full 90 minutes of the but will now miss Thursday's semi-final against Spain.

Team doctor Enrico Castellacci said: "The player cannot recover between now and the final on Sunday. We prefer not to take any risks."

He added: "In agreement with the coach Cesare Prandelli, it was decided to send him back to Milan after speaking to the medical staff at AC Milan, who will look after him."

Balotelli had played as the lone central striker in Italy's three group games, and Prandelli has Alberto Gilardino, Sebastian Giovinco and Balotelli's Milan team-mate Stephan El Shaarawy as his forward options for the match with Spain.

Italy lost last year's Euro 2012 final 4-0 to Spain, and Prandelli admitted that Balotelli's absence may lead to a change of formation.

"Without Mario, we need to work even more at a collective level," Prandelli said.

"We'll have players with different characteristics, but the aim is to make the team even more compact."

Playmaker Andrea Pirlo may be fit to face Spain after he missed the Brazil match with a calf injury.