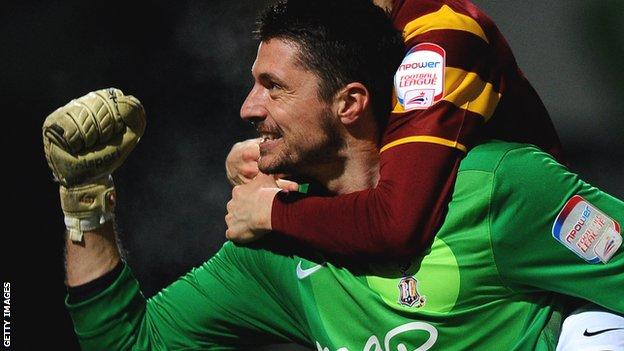 Ex-Bradford City goalkeeper Matt Duke says leaving the club for Northampton Town was the "toughest decision" he has made in football.

Duke told BBC Radio Leeds: "I had an offer but it wasn't something I was happy with.

"The biggest thing is I'm going to be concentrating on football, whereas at Bradford it was as a player and coach."

He continued: "I got another offer from somewhere else and I'm happy with that. I still feel I've got a lot to offer by playing.

"The lads and fans at Bradford are amazing and it's difficult to leave them but it's a football decision for myself and my family.

"The cup run may never be done again by a League Two club. They are the most amazing memories."

With Northampton losing last season's loan goalkeeper Lee Nicholls back to his parent club, Wigan Athletic, Duke will take the number one shirt.

"I went on loan there a few seasons back and [Northampton] is a great club," he added. "It will be easier to settle in having been there before.

"I've worked with Aidy Boothroyd before and he really wants me there, and that's a nice thing to know."