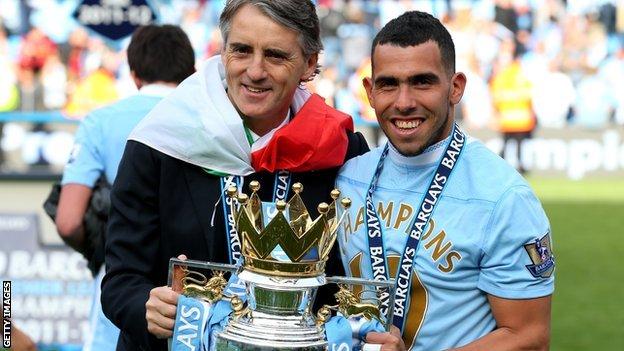 Carlos Tevez's departure from Manchester City for Juventus will leave behind a trail of trophies and headlines - representing the good, the bad and the ugly side of the Argentine's turbulent club career.

From the moment he sat alongside fellow countryman Javier Mascherano at Upton Park on Thursday, 31 August 2006, Tevez took a central role in the Premier League's dramatic story - first at West Ham, then with Manchester United and latterly during a eventful stint with City.

The 29-year-old is revered as a Hammers' hero for preserving their place in the top flight with a winner at Old Trafford on the final day of the 2006-07 season, sending Sheffield United down and sparking an acrimonious, expensive row. 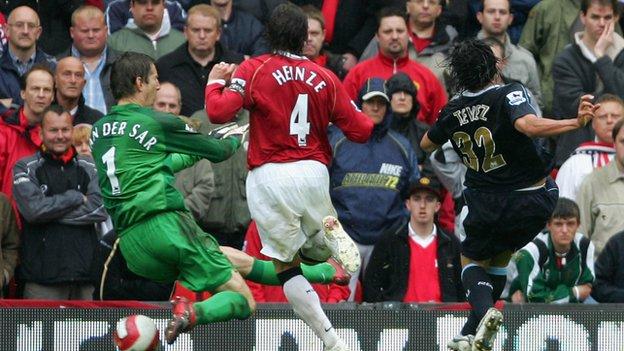 Having been West Ham's saviour, he joined up with Cristiano Ronaldo and Wayne Rooney to form a golden triangle of attacking talent at Old Trafford, before becoming - literally - the poster boy for City's challenge to the dominance of their neighbours.

Tevez's shock arrival at West Ham set the tone for his seven years in England. An outstanding attacker, he was beset by controversy but was gifted and single-minded enough to move on and collect the domestic and European game's highest honours.

The fall-out from that Tevez winner at Old Trafford took years to settle.

West Ham were fined £5.5m after being found guilty of acting improperly and withholding vital documentation over a potential third-party ownership row surrounding Tevez and Mascherano.

Crucially, West Ham were not deducted points - so Sheffield United dropped into the Championship insisting they were the victims of injustice. A compensation payment, reported to be £18.1m, was eventually agreed between the two clubs.

For all this, Tevez was not distracted and demonstrated - as he would so often - that he could dismiss off-field matters to excel for his club.

And excel he did, a player who always won the hearts of supporters by welding natural talent to a tireless work ethic and an ability to drag his team-mates into areas of endeavour they may not have wished to go.

There have been many accusations levelled at Tevez during his time in England but he could never be accused of offering up short change once he was on the pitch.

Sir Alex Ferguson was impressed enough by Tevez to take him to Old Trafford just three months after he scored that vital goal for West Ham. But even that transfer was overshadowed by controversy. There were questions as to whether the £2m "transfer fee", for what effectively became a two-year loan deal, should be paid to his club or to the companies MSI and Just Sports Inc, belonging to advisor Kia Joorabchian, a constant presence in the player's career.

United fans soon forgot this wrangling as he helped them to consecutive Premier League titles, and a clutch of other trophies. He played in the 2008 Champions League final win over Chelsea in Moscow - scoring in the penalty shoot-out - and the subsequent Fifa Club World Cup victory.

Another Champions League final came 12 months later, and he played the second half as they lost to Barcelona in Rome. In between, Tevez scored in another shoot-out as Tottenham were defeated in the 2009 League Cup final.

Those supporters pleaded noisily with Ferguson to sign him on as speculation mounted about his future in 2009 - even voicing loud disapproval when he was substituted in the title-clinching goalless draw against Arsenal that turned out to be his final Old Trafford appearance for United.

This status was to change forever once a £25.5 permanent move to United failed to materialise and Tevez swiftly became the symbol of the new financial muscle being wielded across the city at the Etihad Stadium.

He changed sides in a signing that was not only a shot across Ferguson's bows but also a clear signal that City's Abu Dhabi owners meant very serious business.

As if this was not enough, a giant city-centre poster of Tevez - arms outstretched in triumph - soon appeared under a sky blue graphic emblazoned with the words "Welcome To Manchester".

Ferguson's nose could not have turned up more had Tevez let off a stink bomb off in his office as he said: "It's City isn't it? They're a small club with a small mentality. All they can talk about is Manchester United. They can't get away from it.

"They think taking Carlos Tevez away from Manchester United is a triumph. It is poor stuff."

But the signing of Tevez was not simply about football politics. City had acquired a top-class player with a point to prove at the peak of his career. It was a potent cocktail.

He became an instant hero at City. Many will remember his two goals in the League Cup semi-final against United in January 2010, not least a celebration of his second goal that took him ominously close to a stone-faced Ferguson. 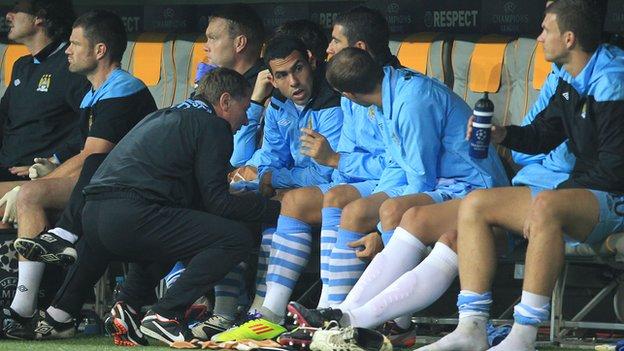 United won that battle over two legs but City had arrived for the long-term - something that could never quite be said with conviction about Tevez.

He subjected a written transfer request in December 2010, citing homesickness, but that was soon smoothed over. Five months later, Tevez captained City as they won their first trophy for 35 years, defeating Stoke City 1-0 at Wembley to win the FA Cup.

The biggest row to engulf Tevez and his camp came in September 2011 when manager Roberto Mancini insisted he refused to come as a substitute in the Champions League defeat away to Bayern Munich.

Tevez and his representatives always insisted this was not the case and that there had been a misunderstanding but it led to a protracted public stand-off, with Mancini insisting the striker could not play for City again.

The timeline of events revealed the scale of the rift as City initially suspended Tevez for two weeks pending an investigation. Tevez was later fined for misconduct before flying back to South America to begin unauthorised leave on 7 November - a move that cost him nearly £10m in salary, fines and lost bonus payments.

An apology eventually arrived in February and, despite some early unease, City's fans welcomed Tevez back for the climax to the season. He returned in time to be part of an extraordinary finish to the campaign, as City ended a 44-year wait for the league title in dramatic fashion, thanks to Sergio Aguero's injury-time winner against QPR.

It was an unlikely transformation from villain to hero, even by Tevez's standards. 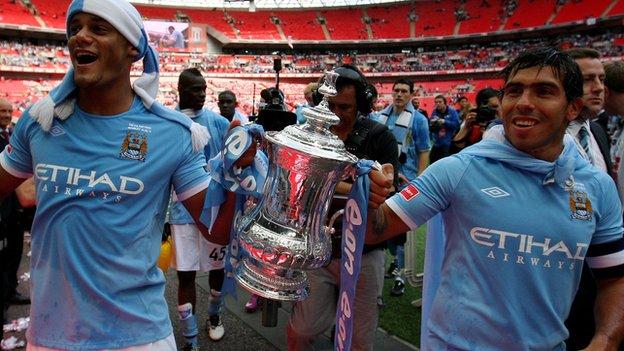 Sadly for City, it could not be repeated last season. Mancini lost his job in May and, with Manuel Pellegrini moving in, Tevez is finally taking his leave.

Despite all the controversies during his four years with City, Tevez leaves on amicable terms. Both player and club see his transfer to Juventus as a fact of football life. He had one year left on his contract at the Etihad Stadium and a new one was not in the offing.

He leaves with the best wishes of the majority of City supporters. Most of them see him as someone who joined them on the ground floor as they began their rise to challenge United.

The Premier League is likely to be duller for the departure of Carlos Tevez.