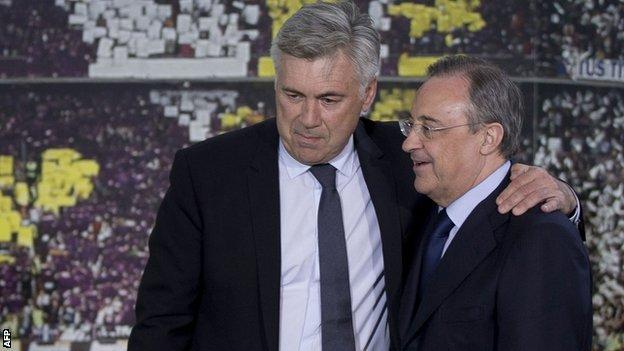 New Real Madrid manager Carlo Ancelotti has been told the pressure to succeed will be unlike anything he has known.

The 54-year-old Italian has won the Champions League twice and league titles in Italy, England and France.

"He should know that nothing he has experienced will be similar to what awaits him at this club," said club president Florentino Perez.

Ancelotti, who has signed a three-year contract, announced ex-France star Zidane, 41, will sit alongside him on the bench after previously being Real's sporting director.

Clement follows Ancelotti from their former club Paris St-Germain, where he was appointed as assistant coach by the Italian in December 2011.

The 41-year-old, whose brother Neil played for West Brom between 2000 and 2010, worked under ex-Chelsea boss Ancelotti at Stamford Bridge. He then moved to the French capital after leaving his role as Steve Kean's assistant at Blackburn.

Ancelotti - who has also managed Juventus and AC Milan, and last season led PSG to the French title - vowed to get his new side playing spectacular football.

"This is the most prestigious club in the world - and we have to win by playing the most spectacular football because the history and tradition of this club is in playing offensive football," he said. "And we're going to work hard to play the football that will make the fans happy.

"Everything that we need is there. I think this is going to be a very good project.

"I have the support of the club, the president and the fans, so I think this will be a very happy season for Real Madrid."

Ancelotti replaces new Chelsea boss Jose Mourinho, who failed to win a trophy in his third and final season at the Bernabeu.

The Italian maintained that winning the club's 10th European Cup is his biggest challenge. Madrid have not lifted the Champions League trophy since 2002.

"It is a great objective, for everyone associated with the club," he said.

"I have the ambition and the responsibility to do this and it is not a problem. Winning the 10th European Cup could be such a huge motivation."