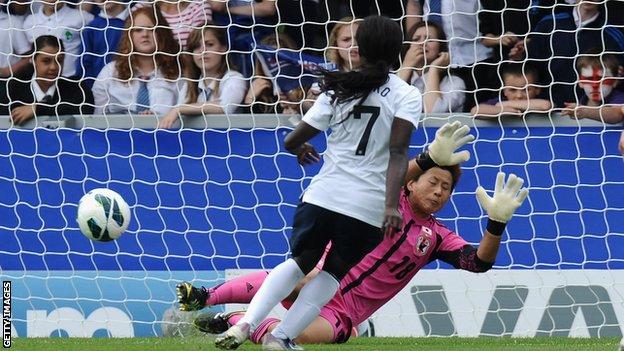 England earned an encouraging draw with world champions Japan in their build-up to next month's European Championship.

Hope Powell's side weathered early pressure to take the lead through Eniola Aluko before the break.

She was played in by Rachel Yankey, who was making a record 126th senior team appearance, beating former goalkeeper Peter Shilton.

But Japan equalised 14 minutes from the end when Nahomi Kawasumi finished after an error from England's Fara Williams.

And the visitors, who also won a silver medal in last year's London Olympics, almost won it when Emi Nakajima smacked a shot against the post, although Lucy Bronze also had a late goal ruled out for offside.

England, who have suffered an injury crisis in the build-up to Euro 2013, appeared to come through the match without any further scares.

But there was no sign of Kelly Smith, who continues to come back from a shin injury, while captain Casey Stoney and left-back Steph Houghton were left on the bench as they recover from injury problems.

It was a thorough work out for England in front of a 5,327 crowd, which included 4,500 local schoolchildren who had been given free tickets by the Football Association as part of their 150th anniversary celebrations.

Powell's team fly to Sweden on Monday and face the hosts in a friendly match on 4 July ahead of their Euro 2013 opener against Spain on 12 July.

And although England started slowly, they will be heartened by their incisiveness in the final third as they created the more clear-cut chances.

The hosts struggled for possession in midfield to begin with, but when they attacked they caused Japan problems.

The match kicked off at 13:45 BST - because Japanese TV insisted it was available for their primetime audience. Viewing figures of 15 million were expected in Japan for the game.

Yankey captained the side on her record outing and she played her part in England's opener when, after a sweeping England attack, the 33-year-old slotted the ball through to Aluko, who finished from 10 yards.

Up until that point, Japan had stroked the ball about in midfield with some ease and the Nadeshiko should have gone ahead from several chances, with Kozue Ando going closest after she was inches away from connecting with Yuki Ogimi's cross.

But Hope Powell's team recovered as Aluko was twice off target before she scored four minutes before the break.

Chelsea striker Aluko was again involved after the interval as she set Anita Asante clean through, but the midfielder skewed wide.

That proved costly as Williams' mistake let Japan in for the leveller and they could have won it late on when they hit the woodwork.