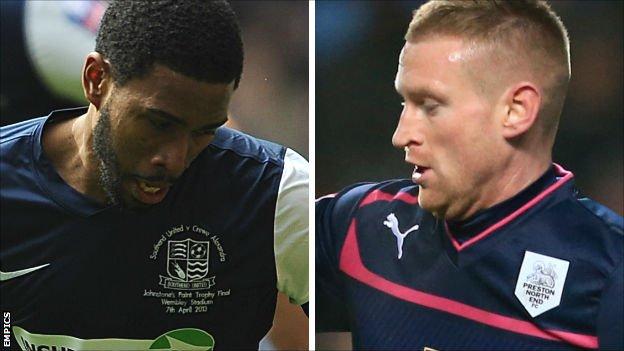 Port Vale have signed Chris Robertson following his release by Preston and will add Gavin Tomlin to the squad when his Southend deal expires on 1 July.

Defender Robertson, 26, was a regular at Deepdale last season, while striker Tomlin, 30, was the Shrimpers' top scorer with 16 goals.

"Gavin has scored goals regularly for Southend. He can play wide as well. He will be a very useful addition."

Vale, who hope that skipper Doug Loft will next week be the last of their out-of-contract players to sign a new deal, have also announced the creation of their first development squad.

It will be made up of 10 players, including three first-year professionals already at the club, Tom Morris, Doug Price and Ryan Boot, who had already signed their first contracts.

In addition, Cheye Alexander has signed from Premier League side West Ham United, along with players from two Championship clubs, Ben Jefford, from Reading and Louis Tambini, from Leicester City and Jordan Hugill has arrived from Yorkshire non-league side Marske United.

All 10 players have signed one-year contracts and will work under a new development squad coach, to be appointed next week.