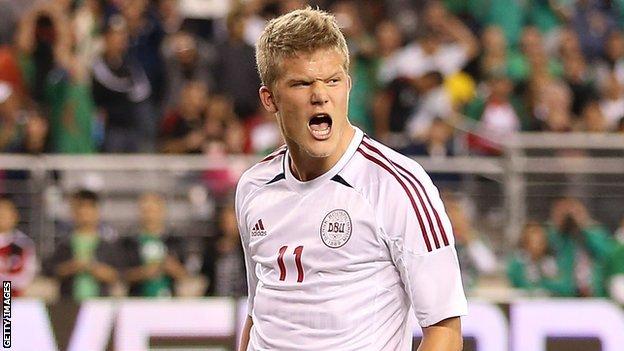 The 6ft 4in striker passed a medical on Monday and has signed a five-year contract with the Premier League newcomers.

"He's a big guy, but actually when he was a youth player he wasn't that big, so he developed his technique and needed to survive on his technique and suddenly he just flew up and got big. So he has the technique and the physicality. He broke through instantly and scored a lot of goals and got to the national team, so he's been a great story this season in Denmark."

"This is a dream come true for me, I was impressed by what the club is trying to do," he said.

Interviewed for Cardiff City's website, Cornelius added: "I've been given a great opportunity and this is a very exciting project that's taking place at Cardiff City.

"I'm very happy to be here and to be playing for this club in the Premier League."

Cornelius is highly rated in Denmark having represented his country at under-18, under-19 and under-20 before making his full international debut against the Czech Republic in September 2012.

He scored his first international goal in the 1-1 draw with Mexico on 31 January this year.

The Dane is manager Malky Mackay's first signing since leading the club to the Premier League.