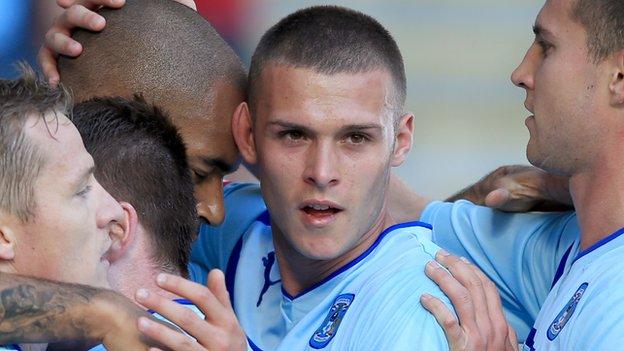 "Billy is one we want to challenge for a regular first-team spot," he added.

Sky Blue starlets on the up

"Callum was involved with the first team towards the end of last season having fought hard to recover from injury problems and proved he deserves another deal."

While 21-year-old Wilson and 19-year-old Daniels have first-team experience at the Ricoh Arena, fellow teenager Phillips is yet to make his Coventry debut, although he did spend the final three months of last season on loan at non-league neighbours Nuneaton Town.

The 19-year-old, who came through the ranks at the Ricoh Arena, is the son of former Wales international midfielder Dave Phillips, a member of the Sky Blues' 1987 FA Cup winning team.

"His loan spell proved a valuable experience," said Pressley. "And we are hoping he continues with his hard work this season. I want to have a strong squad next season with every position covered, and Aaron will be an important part of that."