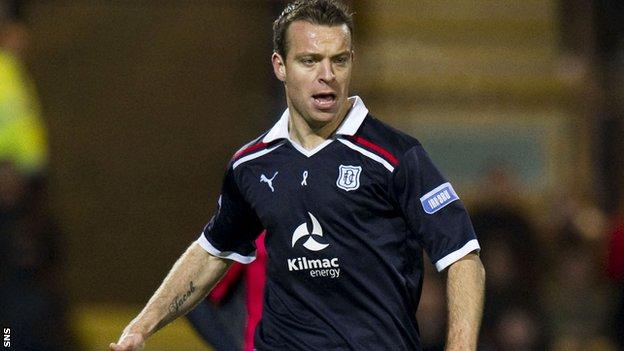 Midfielder Gavin Rae revealed he did not hesitate to make the move to Dundee despite potentially having options in the Scottish Premier League.

The 35-year-old signed on at Dens Park for the third time in his career after being released by Aberdeen.

"I had a bit of interest from St Johnstone but nothing really fully materialised out of that," said Rae.

"It was a case of whether to take a chance and hang on and see what was out there or else sign for Dundee."

And he added on BBC Radio Scotland's Sportsound: "To get the opportunity to do a little bit of coaching [with Dundee] and go back to a club that I love is an easy enough option.

"My kids start school after the summer and I didn't really want to relocate. So that's why the Dundee option was brilliant."

"I learned very quickly when I'd just signed for Rangers. Somebody had asked an innocent question and I'd answered it innocently. They asked, as someone from Scotland, if I viewed the Old Firm games more importantly than a foreign player does. I said maybe, because I've grown up watching the games on TV and maybe the foreign players haven't.

"The next day, the headline was basically saying that foreigners don't have a clue what it's like to play for Rangers! I'm in the dressing room with Stefan Klos and he was fuming! But Michael Mols was brand new - he understood what had happened. It was an innocent comment that came back to bite me."

The Scotland international spent eight years at Dens Park at the start of his senior career before moving to Rangers in 2004.

In 2007 he left Ibrox to embark on a successful four seasons at Cardiff City, during which he appeared in an FA Cup final.

Rae returned to Dundee in 2011, helping them win promotion to the SPL before getting the chance to join his boyhood favourites Aberdeen.

And he revealed it did not long to decide on his next destination after Dons manager Derek McInnes told him there was no fresh deal on the table at Pittodrie.

"Pretty much as soon as I got the word that I wasn't getting a new contract at Aberdeen the gaffer [Dundee manager John Brown] was on the phone wanting to speak to us," he said.

"I've got a good connection with Dundee anyway, they've been a brilliant club to me throughout my career so that was the easy side of it.

Brown has persuaded several of Dundee's squad members from last season to extend their stay at Dens Park for the new campaign and Rae is confident about winning promotion again.

"The manager's putting together a pretty strong squad for the First Division," he said.

"We're certainly going to be up there as favourites but that's the pressure you need to live with at Dundee.

"Hopefully we can deliver on that. We really want to come straight back up."