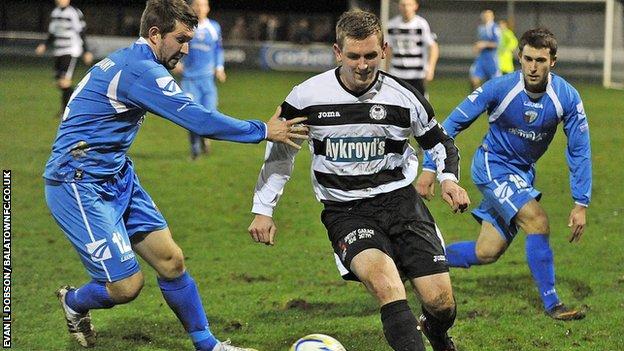 Bala Town could only have dreamt about playing in Europe ten years ago - very appropriate for a team sponsored by a pyjama manufacturer who take on Estonia's Levadia Tallinn on Tuesday.

A decade ago, Bala were playing parks football in the Welsh National League (Wrexham Area) before they won promotion to the second-tier Cymru Alliance in 2004.

Progress on and off the field since promotion to the Welsh Premier League in 2009 has ended with the club taking part in European football for the first time in their history.

John Irving's late goal at Port Talbot in a play-off final in May secured victory and Bala's place in the Europa League, an achievement which sponsor and club general manager Nigel Aykroyd is "incredibly proud" of.

Founded in 1998, Levadia Tallinn beat Dutch Eredivisie side FC Twente and ran Newcastle United close in the Uefa Cup in 2006.

And the man starting his tenth year in charge of team affairs at Bala acknowledges his part-timers face a tough test against the seven-times Estonian champions.

"It would be amazing if we could get through over two legs," director of football Colin Caton said.

"They've [Levadia] had some great results in Europe and they're experienced in European games whereas ourselves are going into it [for the first time].

"But I wouldn't bet against the lads I've got. They never give in and nothing fazes them.

"We'll show them respect but on the other hand we won't respect them on the pitch because we'll be looking to set ourselves out to play the way we play. I want the result as much as anybody."

The side, whose home ground is Maes Tegid in Bala, qualified for Europe after a remarkable second half to the season in which they won 13 consecutive games.

And although Bala and Caton himself have never competed in Europe, players such as ex-Llanelli goalkeeper Ashley Morris, Connall Murtagh and Mark Connolly have European experience.

"It's exciting times for me and everybody," said Caton ahead of Tuesday's match at the Belle Vue home of his former club Rhyl. "We're going to cherish every moment.

"The surrounding towns and villages are all going to be behind us so it could be a really great occasion if we get a result.

"We want to try and get something to take over there the week after."

Bala are not the only Welsh Premier club making their European debuts this week.

Prestatyn Town, who were promoted to Welsh football's top flight a year before Bala in 2008, will also make their European bow at Rhyl's Belle Vue.

Victory over Bangor City secured the Welsh Cup for the first time in the Seasiders' history in May and also ensured European football.

Latvian side Liepaja Metalurgs are the opponents in the first leg on Thursday, and for the north Wales club it will be a trip into the unknown.

"They're supposed to be quite a strong team, but we'll have to wait to see it for ourselves," Prestatyn director of football Neil Gibson told the Rhyl Journal.

"We could have drawn more established teams like Malmo or Rosenborg, so in that respect it's quite a good draw.

"We'll be looking to give ourselves a good account of ourselves as we can, and we'll aim to get as far as we can in the competition."

The third Welsh side making their European debut will also face Latvian opposition.

Airbus UK Broughton, or AUK Broughton as they are known in Europe because of Uefa rules, have their origins as the works team of an aerospace factory on the Flintshire-Cheshire border.

Promoted to the Welsh Premier League in 2004 the club finished runners-up to champions The New Saints last season.

Their reward is a Europa League first qualifying round tie against four-times Latvian champions FK Ventspils.

Director of football Andy Preece, the former Crystal Palace and Blackpool striker, and his assistant Andy Morrison travelled to Latvia to watch their opponents in action before Thursday's first leg at Wrexham's Racecourse ground.

"They have won their league twice in the past four seasons, they've won the cup and they are joint top of the league at the moment," ex-Manchester City defender Morrison told the Flintshire Chronicle.

"It's going to be a massive ask. Their big advantage is that they are halfway through their season."

"We are very confident we will do ourselves justice and our players will not be fazed by the job in hand because I know the character we have in the dressing room.

"The lads will attack it full on and give everything they possibly can to get the right result."