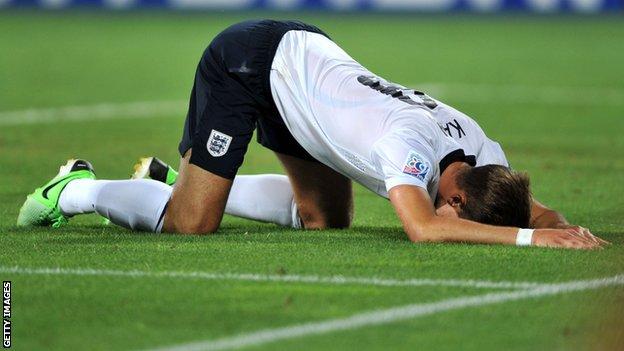 England were knocked out of the Under-20 World Cup at the group stage following a 2-0 defeat by Egypt.

Peter Taylor's side needed to win to reach the quarter-finals in Turkey but were beaten by late goals from Trezeget and Hassan Ahmed.

England drew their first two matches - 2-2 with Iraq and 1-1 against Chile.

Their exit follows a disappointing performance from the Under-21s, who lost all three games at the recent European Championship.

Defender Eric Dier then cracked a 20-yard free-kick against the crossbar midway through the second half.

And England were punished for missed opportunities when Trezeget curled in a brilliant 80th-minute strike before Ahmed added a second in injury time.

Taylor said: "I was disappointed with our performance in open play, but we created more chances."

And reflecting on the tournament, he added: "We could have won our first match, we were 2-0 up and then I thought we played exceptionally well against Chile when we could have won too.

"I think we're very disappointed tonight because they didn't do as well but the experience of playing in the U20 World Cup will have been fantastic for everybody."

England have now gone 16 matches without a victory at the Under-20 World Cup - their last win was in 1997.

810 comments
Back to top
unknown