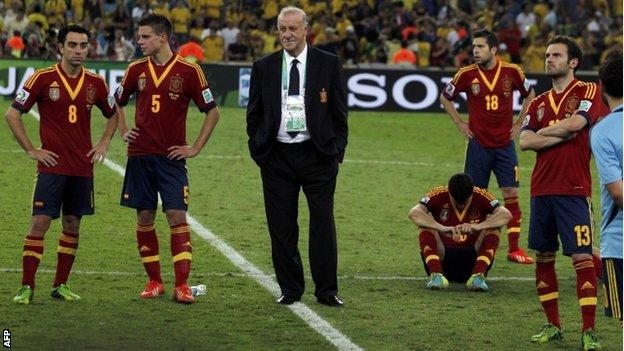 Spain coach Vicente Del Bosque was proud of his team's Confederations Cup campaign despite their 3-0 defeat by Brazil in the final at the Maracana.

He also refused to blame the hot weather conditions in Fortaleza where they were taken to penalties by Italy in the semi-final on Thursday.

"I've been with an exceptional group of players who gave their all in what have been a fantastic 28 days," he said.

"One day less rest was not the reason we lost. Brazil were the better team."

Spain were outclassed by the hosts with two goals from Fred and one from Neymar setting up a convincing victory in Rio.

The world and European champions missed a penalty through Sergio Ramos and had Gerard Pique sent off to complete a miserable finale to their tournament.

Del Bosque added: "We are not happy with this defeat. We have got to analyse it, we can't go and ignore it, but when we look at our track record we can be proud and on some days when the other team is stronger we will lose matches.

"We have great players, a clear style of play and I see no reason to change that because of one defeat.

"I think deep down that we've had a good Confederations Cup. I'd rather take the positives away with me today."