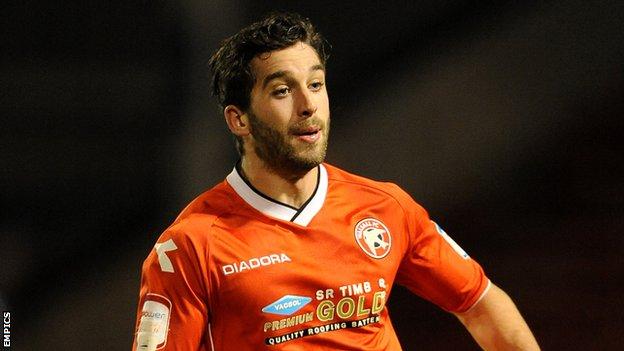 Brentford have completed the signing of Walsall striker Will Grigg following his rejection of the offer of a new four-year contract at Bescot.

The 21-year-old, Walsall's 20-goal top scorer last season, has agreed a three-year deal with their League One rivals.

Brentford will have to pay a fee for the Northern Ireland international.

"The two clubs can't agree on a compensation package, so it looks like it will go to a tribunal," Walsall boss Dean Smith told BBC WM.

"I just hope that the tribunal will see sense. We want the figure that represents Will's value - 20-goal strikers are very rare and they cost money. We don't want to be underselling our player.

"If any manager was given a million pounds and told to go out and find a 20-goal striker, they'd find it extremely challenging.

"We've worked extremely hard on Will. We started negotiating a new deal with him many months ago, we've had a number of chats over the phone and offered him the best contract we've ever offered to a player n this league.

"Reports that I was angry about it are miles away from it.

"I was just disappointed that his agent hasn't done better for him. I thought he could have got Will into the Championship."

Grigg, who will be 22 on Wednesday, came through the youth ranks at Walsall, making his debut for the Saddlers in December 2008 before going on to score 28 goals in 109 games.

"Will is another piece of our jigsaw for the 2013-14 season," said Brentford sporting director Mark Warburton. "He's another young, talented player who has committed his future to the club."