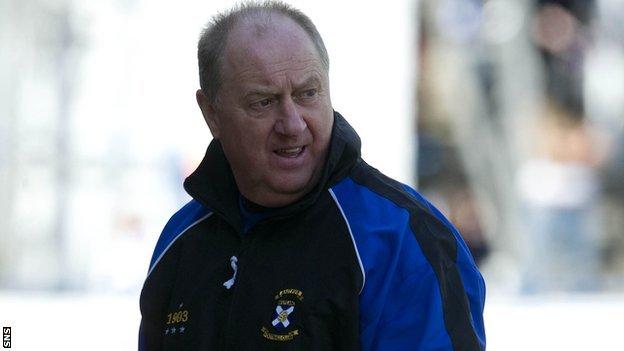 Billy Brown has returned to Hearts as assistant manager on a voluntary basis.

The 62-year-old had two spells in the role at Tynecastle under manager Jim Jefferies.

And Brown, most recently manager of East Fife, will return to work at the club, currently in administration, without pay.

"I can't afford to bring in an assistant and it's a measure of the man that Billy was willing to help without getting paid," said manager Gary Locke.

Locke worked as a coach under Jefferies and Brown at Hearts, and expressed his delight at the veteran coach's return.

"It's an absolute no-brainer for me," he said. "It's not often you get the chance to get someone of Billy's experience and he's offered to come in and help me out during pre-season which is a magnificent gesture.

"He's someone I obviously know very well and I'm delighted to have him here. We are all in this together."

Brown first arrived at Hearts in 1995, following spells as assistant to Jefferies at Berwick Rangers and Falkirk, with the Tynecastle club winning the Scottish Cup in 1998.

He then followed Jefferies south to Bradford in 2000 before the duo took over at Kilmarnock two years later.

A second spell at Hearts beckoned in 2010. but, following his dismissal in 2011, Brown then became assistant manager at city rivals Hibernian.

Brown spent season 2012-13 as manager at East Fife, saving them from relegation after winning the Second Division play-offs.

44 comments
Back to top
unknown