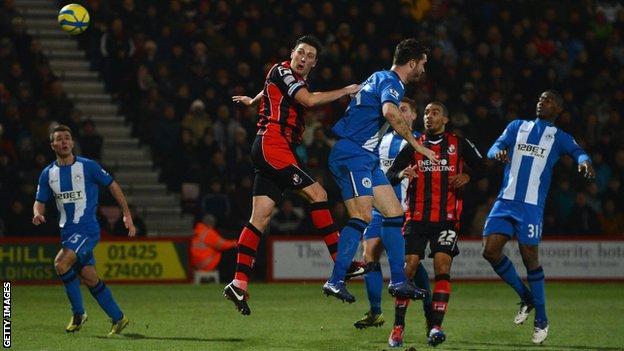 Bournemouth defender Tommy Elphick is happy with the competition for places in the squad ahead of the new season.

The Cherries have signed defenders Elliott Ward and Ian Harte since securing promotion to the Championship.

"The new guys coming in gives healthy competition and at times last season when we had injuries we were bare," Elphick told BBC Radio Solent.

"Naturally you want to play every game, but there are 46 league games next year so everyone will have a part to play."

Despite making just two signings since the end of last season, manager Eddie Howe has hinted that there will not be many more new faces.

"The lads can take a lot of confidence out of the fact that the gaffer thinks there is only one more signing needed, he obviously trusts us.

"The beauty about this squad is the young age and we're all improving," said Elphick.

The squad have now begun a pre-season training camp in Switzerland and he believes it will have a positive impact ahead of the new season.

"For us to be doing something like this just shows the way the club is going," Elphick added.

"Its very important with new faces on board to integrate them quickly into the squad and there is no better opportunity than going away to do that.

"The gaffer is going to get his way of playing over to them and with us over there we can train twice a day and get some team building in."

The 16-year-old has signed a two-year deal, which begins on his 17th birthday.

"I've just left school, so to be able to come in full-time and train with the first team has been really good. I want to stay here and I'm really happy at the moment."