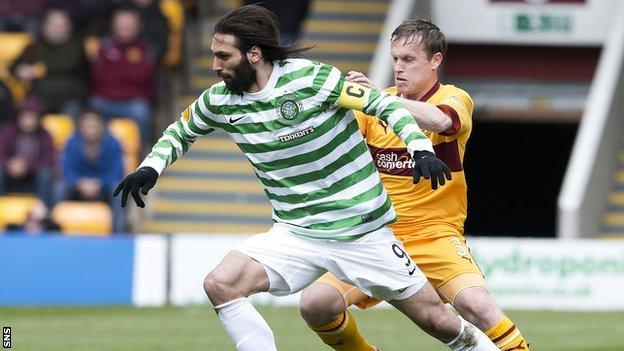 The Scottish football season 2013-14 is upon us. Here, BBC Scotland previews the upcoming campaign.

After months of negotiations, - the Scottish Professional Football League.

The Scottish season kicks off

Those involved in the process have admitted that fans are unlikely to see much difference on the pitch, with the league structure of 12-10-10-10 continuing.

However, a new round of promotion/relegation play-offs between the top two tiers, in addition to the one automatic one up, one down system, will come into force this season.

Furthermore, below the fourth tier, there will be a new Lowland League as the country makes its first step towards a pyramid structure.

This new division will feature sides previously part of the East of Scotland, South of Scotland and Junior leagues.

From season 2014-15, the winners of the Lowland and Highland Leagues will play off against each other for the right to compete for a place in Scotland's fourth tier against the lowest-placed side in that division.

Four Scottish clubs have been playing qualifiers in July.

Celtic's pursuit of a place in the group stages of the Champions League began against Northern Irish side Cliftonville. and at the midway stage of the third qualifying round tie against the Swedes of Elfsborg.

and followed that up with a 1-0 first-leg win away to Minsk in the Europa League third qualifying round, while Hibernian have been knocked out of the tournament following

Motherwell and face an uphill battle to progress.

Celtic are the only Scottish side to have featured in group stage competition over the past two seasons and co-efficient points are needed to secure a smoother passage for the country's European representatives in future seasons.

The first round of the Ramsdens Cup involving second, third and fourth-tier clubs gave some fans an early start to the domestic season on 27 and 28 July.

Rangers, Dunfermline Athletic, Dundee and Raith Rovers are just some of the clubs to have reached the second round.

Most senior clubs will take part in in August, with the first round on 3 August.

The Jags take the place of Dundee, who were relegated last season and will hope to bounce straight back from the second tier, now called the Scottish Championship.

Queen of the South and Alloa Athletic are the sides promoted to the Championship.

Rangers are the obvious favourites to win League One after their successful league campaign last season.

Relegated Airdrieonians (formerly Airdrie United) and Dunfermline are two of the sides the Ibrox side will face this term.

New faces and a few familiar ones

Unsurprisingly, Celtic have been Scottish football's biggest spenders so far this close season with the purchases of Portuguese striker Amido Balde and Dutchmen Virgil van Dijk and Derk Boerrigter.

Qualification to the group stages of the Champions League and the sales of Victor Wanyama and Gary Hooper could give Lennon more money to strengthen his squad for the new season.

Darren Maatsen is one of four Dutchmen to have joined Ross County, who have also signed former Kilmarnock defender Ben Gordon.

Liam Craig and Owain Tudur Jones have moved to Hibernian from Inverness and Saints, respectively, while John Sutton has returned to Motherwell after leaving Hearts.

David Goodwillie has also rejoined his former club, coming back to Dundee United on loan from Blackburn Rovers.

Experienced top-flight trio Cammy Bell, Jon Daly and Nicky Law are some of the players Rangers manager Ally McCoist has brought in to bolster his promotion challenge.

Dunfermline and Hearts are both currently in administration, with the latter incurring a 15-point penalty in the top flight for the new term.

However, the Pars are on course to exit administration via a company voluntary arrangement, a process Hearts may go through later in the year.

Hearts boss Gary Locke believes overcoming the points deficit and keeping his side in the top flight will top any cup triumph the club have achieved.

Dunfermline, whose points deduction last season contributed to their eventual relegation, have the sizeable obstacle of Rangers to overcome if they are to reclaim an automatic place in the Championship.

The play-offs may represent the best chance of promotion for Jim Jefferies' side.

Scotland ended a sequence of four competitive defeats with a surprise but welcome win in Croatia in June.

Hopes of reaching next year's World Cup finals in Brazil had already been extinguished before the 1-0 victory and the remaining games in the current campaign are very much preparation for the Euro 2016 qualifiers.

Manager Gordon Strachan, who took over from Craig Leven in January, will lead the Tartan Army to Wembley to take on England in a friendly in mid-August before a qualifying double-header in September and the return meeting with Croatia in October.

The win in Zagreb provided valuable game time for several aspiring internationals and Strachan may choose the September and October matches to field more players, like Leigh Griffiths, back at Wolves after his scoring exploits with Hibs last term.