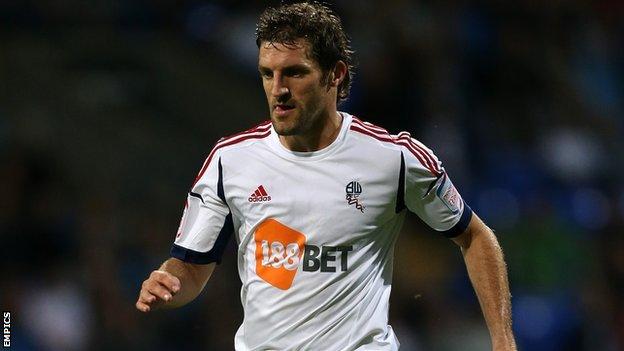 Relegated Wolves have made their first signing of the summer by bringing in experienced Bolton Wanderers defender Sam Ricketts on a free transfer.

The 31-year-old, capped 48 times by Wales, has signed a two-year deal - and been named Wolves' new captain - after his contract at Bolton was cancelled.

"But I just can't honestly look him in the eye and guarantee him a position in the team," added the ex-Wolves striker.

He is the first signing made by new Wolves head coach Kenny Jackett, who first signed him for Swansea City from non-league Telford nine years ago.

"I know Kenny from working under him at Swansea," said Ricketts. "He signed me from Telford and I had two great years with him. We got promoted the first year and narrowly missed out the second.

"First and foremost, he is a nice guy which goes a long way nowadays. There aren't all that many nice managers about and he earns respect from that. He is a calm character who gets teams very well organised and has a proven track record.

"Dropping down a division doesn't put me off at all, because of the size of the club. Wolves are not a club looking to stay in League One."

The move for Aylesbury-born Ricketts, who joins up with two other Welsh international team-mates, fit-again Wolves keeper Wayne Hennessey and midfielder Dave Edwards, counters the flow of transfer activity at Molineux.

Keeper Dorus De Vries has signed for Nottingham Forest, winger Bakary Sako is a reported target for Fulham, and there are impending moves for the Wolves' transfer-listed quartet of Jamie O'Hara and three former captains, Karl Henry, Roger Johnson and Stephen Ward.