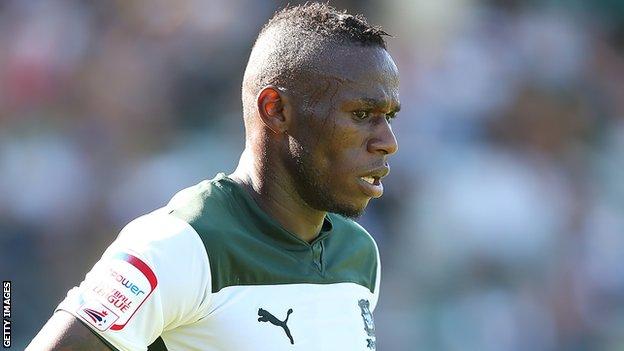 Plymouth Argyle manager John Sheridan says he is not willing to chase Onismor Bhasera after the defender failed to report back to the club.

The 26-year-old Zimbabwean was offered a deal at the end of the season but has not been in contact since.

"I've got to be looking at bringing someone else in now," Sheridan told BBC Radio Devon.

"I'm not going to chase a player around the world when there's one on the doorstep who can do a job for us."

We've made him a very good offer, we like him, the fans like him and he's done well for us. The problem is getting hold of him and finding his whereabouts

The out-of-contract defender made 114 appearances for the Pilgrims having joined from South African side Kaizer Chiefs in 2010.

Sheridan continued: "We've made him a very good offer, we like him, the fans like him and he's done well for us.

"But the problem is getting hold of him and finding his whereabouts."

Sheridan has wasted little time looking for a replacement left-back, with Canadian Martin John and Ryan Dickson both on trial.

John, 24, who signed for Cardiff City in 2010, is training with the club alongside former Argyle trainee Dickson.

"Hopefully one of them will impress enough and fill that position," Sheridan said.

"Martin John has come in on the first day of pre-season and he's worked very hard - obviously we'll keep him around until the games and have a good look at him.

"Obviously we all know what his [Ryan Dickson] potential is. He's been at big clubs and he's been here before, he's a Plymouth lad.

"Again I'll have a good look at him before we make a decision in the next week or so."