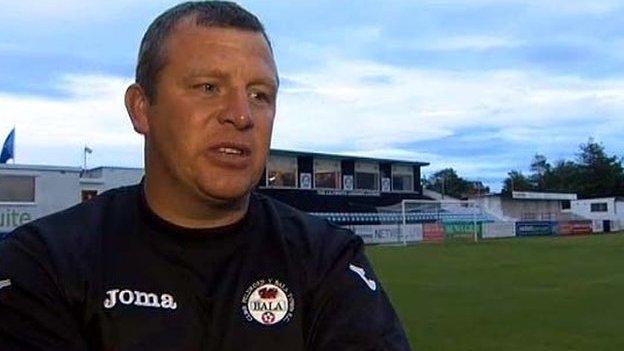 The Welsh part-timers travel to Estonia for the second leg of their first qualifying round tie on Thursday, 11 July, leading 1-0 thanks to Ian Sheridan's third-minute strike.

"We're in the driving seat now," said a confident Caton.

"If we get an early goal over there I think the tie will be done and dusted."

A draw in Tallinn would be enough to see the Welsh Premier League side into the second qualifying round.

'A fantastic night for Bala Town'

"A fantastic night for Bala Town, and a fantastic night for the Welsh Premier League as well. Our first European victory for almost three years and it's just going to help our ranking with Uefa, which hopefully will help us be seeded as teams in the future which will hopefully give us easier games.

"Bala put their bodies on the line defending. They'll have to do the same again probably out in Tallinn, but who's to say that Bala can't progress to the next stage?"

Bala were making their debut in European football against a team who currently lead the Estonian national league.

In addition to starting as overwhelming underdogs, Bala had to play their home leg at Rhyl's Belle Vue stadium because their own Maes Tegid ground does not meet Uefa specifications.

But they made light of that to secure a well-earned victory and leave their manager looking forward to the trip to Estonia.

"They've really gone for it second half and they haven't scored.

Bala resumed training only two weeks ago and Caton believes the match and another week of training will mean his players will be in much better shape for the second leg.

"It'll be difficult there," he added.

"[But] we're going to be fitter, we were tired there towards the end and you know we went into this game not knowing what we were going into.

"We've never been here before and didn't have much information.

"We only had eight days to organise for the game once the draw was done, so now that we know them we'll be able to set up maybe a little bit different and we'll be better prepared.

"[But it was] a fantastic night for everyone involved with the football club - a phenomenal night really.

"It was a great occasion, a lot of people have turned out and to get a result like we've got is absolutely fantastic."