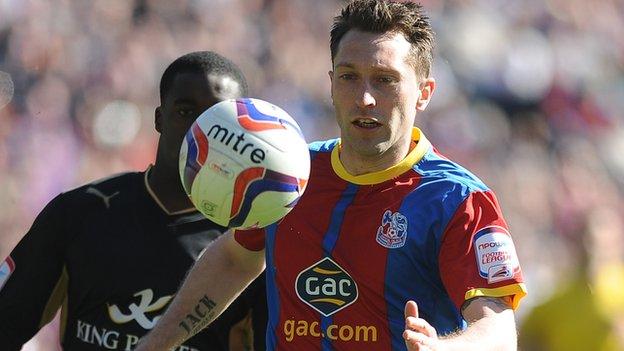 Crystal Palace have completed the permanent signing of midfielder Stephen Dobbie from Brighton for an undisclosed fee.

Dobbie, 30, joined Brighton last August, but spent the final four months of the season on loan at Selhurst Park.

He has played in the Premier League with Swansea and worked under current Palace boss Ian Holloway during two loan spells at Blackpool.

The Scot has signed a two-year deal and is Palace's first signing this summer.

"I enjoyed my football last season here and I like to think I had a part in helping the team get promoted," he told the club's website.

"It is every player's dream, especially in the Championship - they want to be playing in the Premier League.

"You go away and have a nice holiday, but still in the back of your mind, you've only got four weeks off, so maybe in a week and a half, you're going to know who you're playing in that first game."

Having played under Holloway in the past, Dobbie, who can also play as a striker, is also looking forward to continuing their strong working relationship.

He added: "Obviously I've worked with the gaffer a number of times and there was no problem with that.

"A lot of people don't see the side to him that we do - on the pitch, on the training field, on the bus and in the changing room. We know what he's like and we know how good he is tactically.

"You just have to look at the play-off semi-finals and the final, how the boys played the way he wanted and we got the right result. I'm sure he'll be buzzing and raring to go."