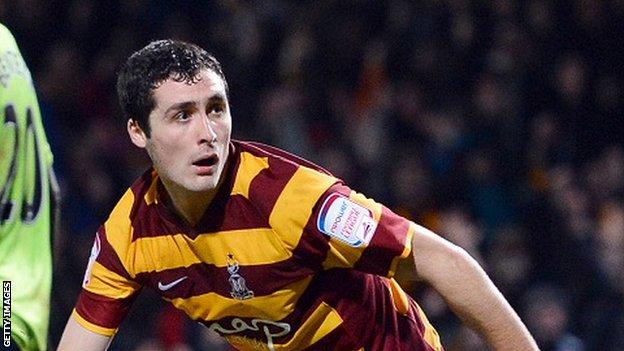 Bradford City defender Carl McHugh has agreed a new one-year deal, keeping him with the newly-promoted League One club until the summer of 2014.

The 20-year-old Irishman started 22 games for the Bantams last season, including the Capital One Cup final.

And City manager Phil Parkinson has told BBC Radio Leeds new signing Jason Kennedy will not be the only new face.

He said: "We have two or three more to come in, we're taking our time and we'll get the right characters."

Parkinson believes midfielder Kennedy is a player with a lot of attributes.

"Jason is determined, hungry, a good size, strong, he can pass the ball, he's committed, he's got a bit of everything," said Parkinson.

"He's not identical to [City captain] Gary Jones, though he has a similar commitment and drive and they should work well together."

Parkinson confirmed that a goalkeeper would be among the new signings following the departure of Matt Duke to Northampton Town.

"We made Matt an offer which we thought was a fair one, but Northampton made him an offer which effectively makes him their guaranteed keeper," Parkinson added.

"We're looking at several options in that department. We need another goalkeeper, we can't start the season with just one and we need a good one.

"The fans knew we had a lot of players already signed on contract, probably in previous years there's been wholesale change, but with the success we had last season that hasn't been necessary.

"It's been a case of simply adding to what we've got."