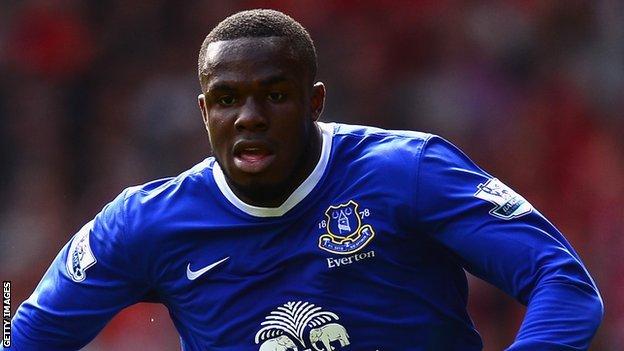 Nigeria coach Stephen Keshi wants to hold talks with Victor Anichebe about his availability for the national team.

The Everton striker recently put his international career on hold so he could "manage his body accordingly".

Keshi is hoping to persuade the 25-year-old to change his mind.

"Anichebe is a great striker. He is young, strong and gives us several options in attack. I plan to visit him in England and talk to him face to face," Keshi told BBC Sport.

"We've tried in the past on the telephone but now is the time to speak to him in a proper meeting atmosphere.

"He's a smart boy, intelligent enough to know what is good for his body and we have to respect his fitness programme with his club.

"We have to put this into consideration when we talk to him. Hopefully, he can change his mind and make himself available to the Super Eagles.

"I need the support of the Nigeria Football Federation to make this happen as soon as possible because we cannot afford to lose a player like Victor Anichebe."

He scored on his debut in a 2-0 win over South Africa to help the Super Eagles reach the 2008 Olympics and he was part of the squad that went on to win silver in Beijing.

But Anichebe has been plagued by injuries over the past few years, including a groin problem on his last appearance for Nigeria in a 2-0 win over Madagascar in 2011.

Meanwhile, Keshi appears to have to shut the door on Newcastle striker Shola Ameobi.

Keshi says he has given up on the former England youth international, who is now 31, and believes other players should be given an opportunity.

"Shola showed a lot of experience when he played against Venezuela last year, but we've not been able to get him to return," said Keshi.

"His experience would have been valuable to this young team right now but I've realised he wants to be left alone for now.

"He has shown he is not prepared to play for us and we have to move on and give other players an opportunity to represent the country.

"We can only wish Shola all the best and concentrate on those we have in the present squad."

Keshi has also revealed that he wants to give some of the country's Europe-based players a chance in subsequent matches.

This could mean another chance for forgotten players such as forward Obinna Nsofor of Rusain side Lokomtoiv Moscow, English Premier League side West Brom's Peter Odemwingie and Obafemi Martins of United States club Seattle Sounders.