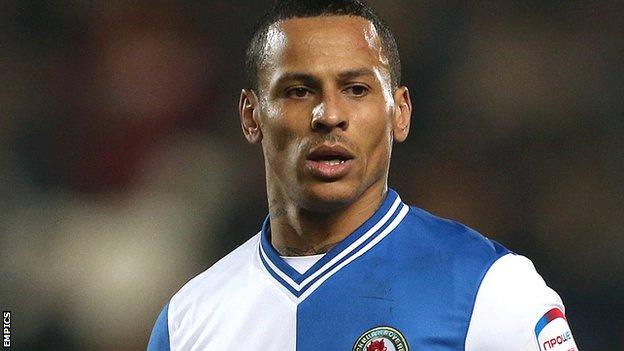 Campbell failed to score in seven appearances last season, which ended prematurely because of a foot injury.

He has signed a two-year contract to move permanently to Ewood Park.

Meanwhile, BBC Sport understands defender Matt Kilgallon and midfielder Alex Marrow will have medicals at the Championship club on Thursday.

Centre-back Kilgallon, 29, was released by Sunderland earlier this summer, while 23-year-old Crystal Palace man Marrow came through the youth ranks at Blackburn.

On Campbell's arrival, Rovers manager Gary Bowyer told the club website: "DJ is a player who has huge experience and is a proven goalscorer at this level.

"He feels he has some unfinished business with the club and is hungry to succeed. He will add a different dimension to our attacking options and he is the right character we want to have on board."

Campbell, who has also played for Brentford, Birmingham, Leicester and Blackpool, is set to feature in Blackburn's first pre-season friendly at Wrexham on Saturday.