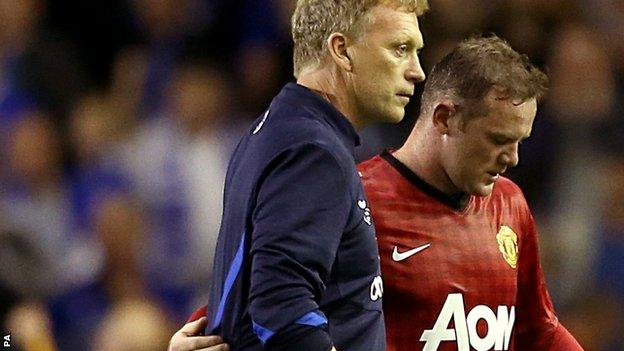 The clock could have been turned back nine years when Wayne Rooney drove into training headquarters to discuss his future with manager David Moyes.

Moyes will recall only too well the summer of 2004 when 18-year-old Rooney returned to Everton from the European Championship as the talk of world football after a series of brilliant performances for England.

Rooney, guided then as now by his trusted advisor Paul Stretford, was the boyhood Everton fan with the "Once A Blue Always A Blue" T-shirt. He was suddenly the game's hottest property and decided to become a red by signing for Manchester United in a £27m deal.

At that time, with Everton desperately short of cash, his relationship with Moyes moving towards breakdown and coveted by every major club in the world, Rooney and Stretford held all the cards when it came to shaping his future.

An elated Sir Alex Ferguson was not prepared to lose out and once Rooney's signature was secured he announced: "I think we have got the best young player this country has seen in the last 30 years."

As Moyes prepared to meet Rooney and his representative almost a decade later amid continued speculation that he wishes to leave United, he may soon become aware that he is not in the position of complete strength he commanded when he moved to Old Trafford from Everton.

This is not the teenage tyro any more. Moyes is meeting a man, not a boy and a man who - unlike the Rooney of Everton in 2004 - cannot in any way be portrayed as bigger than the club he plays for.

He cannot shape the agenda as he did in October 2010 when he asked for a move and questioned the strength of Manchester United's squad under Ferguson, resulting in the reward of a new five-year contract within days.

It is worth remembering that when he collected his Premier League title medal at Old Trafford last season, some jeers greeted his walk to the podium. His status is not what it once was.

This time Moyes can call the shots, although there is little doubt he would prefer to start his reign at United with Rooney, who can still be such a gifted and game-changing talent, than without him.

As United won their 20th title last season, Rooney was often moved to the margins by the manager who signed him.

Rooney was, at best, second fiddle to the outstanding top billing Robin van Persie and his form shaded to such an extent that Ferguson felt able to do without him for the Champions League defeat by Real Madrid at Old Trafford in March.

For all the tactical gloss Ferguson attempted to put on the moment, it was a clear signal that he felt Rooney's standards has slipped. If they had not he would never have contemplated excluding him for a match of such importance.

Ferguson, in due course, insisted Rooney was not leaving. "You have my word on that," was his response to speculation.

Now, of course, Ferguson's word counts for a lot less as it is his successor Moyes who is left to visit familiar territory and clarify Rooney's future.

First it appears he must clear up an apparent communication breakdown between Ferguson and Rooney.

The Scot said following his final Old Trafford game against Swansea City: "I don't think Wayne was keen to play, simply because he has asked for a transfer."

Rooney, it seems, did not interpret events the same way and insists he never asked for a move but Ferguson's continued presence, if only in the background as a United director, means Moyes must address this issue with delicate diplomacy.

If Moyes can instil a measure of calm in his meetings with his former player - and their relationship is now repaired - then Rooney may realise that at this stage of his career United is the best he will get.

And if he comes to that realisation and returns to something like his best Moyes will be pleased to incorporate him in this new Old Trafford era.

Former Manchester United assistant manager Mike Phelan, a close ally and confidante of Ferguson over so many years, told BBC Radio 5 live: "Wayne is at the greatest club you can be at. Why would you want to jeopardise that unless you want a fresh challenge and you feel that challenge isn't being met at Manchester United?"

Was this an echo of Ferguson's thinking on the subject? Phelan was close to events at the end of last season and will have been privy to Old Trafford's inner workings at the time.

The question for Rooney is - can he find a better club or platform than Manchester United should Moyes want him to stay?

At 27 he is playing for the Premier League champions and will hope to be at next summer's World Cup in Brazil with England. Rooney's goal against Brazil in the Maracana just a few weeks ago was a reminder of his marvellous instincts and ability.

If he requires a new challenge, surely the biggest and best he can take on is to re-establish his position of prominence at Old Trafford by sheer weight of performances and provide a reply to the whispers that his best days may just be behind him?

There were times last season when Rooney, the great street footballer who was never happier than on any football pitch anywhere is the world, cut a dejected figure who looked like the joy had gone out of his game.

The only thing that weighed him down before was his medal collection, including five Premier League titles and the Champions League, but suddenly the body language betrayed a character unhappy in his work.

Rooney's looked like he was operating on a flat battery and needed a spark of ignition.

Would he regain that within the framework of tactical discipline Jose Mourinho will work around at Chelsea? Are we to believe Arsene Wenger would move so sharply away from his financial template at Arsenal that he would pay in excess of £200,000 a week to someone who has had 11 hard years in the Premier League?

Bayern Munich, Barcelona and Real Madrid - the real heavy hitters - do not want Rooney so it is hard to believe he can find a better club than Manchester United as a showcase at this stage of his career.

There is, of course, a compelling case to suggest Rooney might benefit from a fresh start and a change of scenery.

But it is a big decision for any player to leave Manchester United behind. And, unlike when he left Everton, the only way may not be up.