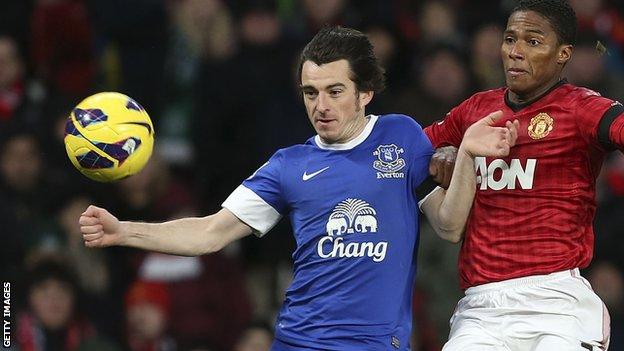 "Leighton is more than a player, he is an icon," said Martinez, who replaced new United boss David Moyes at Goodison Park. "He represents a lot about our football club.

"He is vital for our future and for what we are going to achieve."

Moyes has made Baines one of his top transfer priorities as he begins work at United after being named as Sir Alex Ferguson's successor.

Everton insist the defender, who was named in the PFA's Team of the Year last season, is not for sale. However, United are expected to return with an improved bid.

"A lot of people sometimes get upset when other clubs show an interest in your players - I always feel that that is a real compliment because that means Leighton is working and progressing really well," said Martinez.

The Spaniard believes Baines is the "best left-back in the country" and says it is an important season for the Liverpool-born player as he looks to displace Chelsea's Ashley Cole in England's starting XI ahead of the 2014 World Cup.

"As a player, it's a very important year for him in terms of setting standards and trying to reach important things at the club," said Martinez.

"And, in a World Cup year, we are really looking forward to seeing that real consistency of performances and making sure he can be himself, as he has been in the last few seasons."