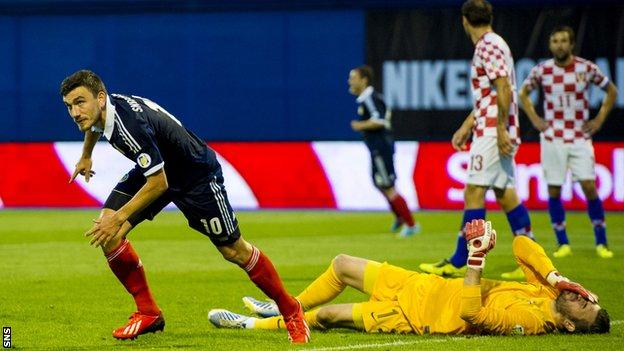 Gordon Strachan's Scotland side have climbed 24 places to 50th in the latest world rankings.

And they sit four places behind Wales and six off of the Republic of Ireland.

Spain top the rankings, while England are down six places to 15th, and Northern Ireland up to 111th.

Scotland can no longer qualify for next year's finals in Brazil, but the victory ensures the Scots will be in pot four for the draw for Euro 2016.

"The win over Croatia was a very proud moment for everyone involved and made us all feel better about ourselves over the summer," said Strachan.

"Croatia are a top side and were ranked fourth in the world at the time so that shows you just what we were up against.

"We played very well but the challenge now is to keep that momentum going and maintain the standards of fitness and performance that we set ourselves in Zagreb.

"Now our focus turns to next month's match against England: it's one that gets everyone excited and we'll be doing everything we can to win the match."

Germany remain second in the latest rankings, with Colombia climbing four places to third. Brazil, fresh from their Confederations Cup win, have risen 13 places to ninth while Croatia have slipped to eighth.

19 comments
Back to top
unknown