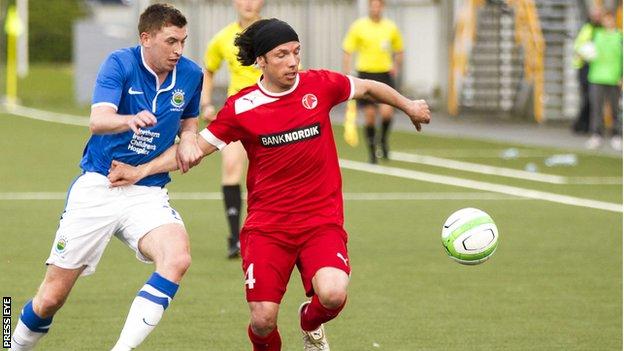 Linfield manager David Jeffrey has hailed his players as history makers after Wednesday's Europa League win over IF Fuglafjordur in the Faroes.

It was only the second away win in Europe in the Belfast club's history, the other being a European Cup win over Norwegian side Valerenga in 1966.

"This is a special landmark for the club," said boss Jeffrey.

"I was four years old when Linfield last won away from home in Europe, so it has been a long time coming."

Linfield fielded a number of new signings, including international goalkeeper Jonathan Tuffey and former Glentoran striker Andrew Waterworth, in the match in Torshavn.

Waterworth scored the first goal in the 68th minute and that was followed by a sublime finish by substitute Philip Lowry.

The second leg is at Windsor Park on Wednesday, 10 July with the winners progressing to play Greek team Skoda Xanthi.

"It is only half-time and we have to concentrate on finishing the job," added Jeffrey.

"But, as far as the first leg is concerned, the players deserve a lot of credit, especially because they have had only eight training sessions and one pre-season friendly match against Ards.

"It is particularly impressive when you consider the number of new personnel. We had five new starts for the game.

"Last season was a disappointing one by our high standards, but you cannot keep achieving that level of success.

"It was time to rebuild again and that is what we are doing now."