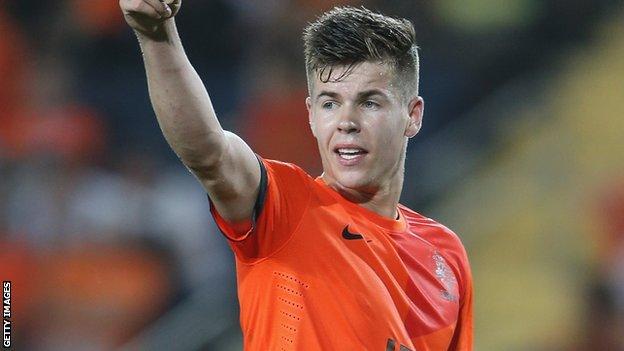 The Amsterdam side wanted to sign the 20-year-old Vitesse Arnhem midfielder themselves, but lost out to the Blues.

"Van Ginkel is a great young talent and we would have liked him to come to Ajax," Overmars told BBC Sport.

"Whether it is too early for him to go to Chelsea or not, I don't know. With us, he would have played a lot of games and played in the Champions League."

Marco van Ginkel joined Vitesse Arnhem when he was just seven years old and has progressed through their academy. He made his debut for the club in April 2010 and his international debut came in November last year.

Van Ginkel was last season voted the best player under the age of 21 in the Netherlands.

He played a key role in helping Vitesse to end the season in fourth, their highest league finish since 1998, and in November won his first Netherlands cap.

Overmars, who won the Champions League with Ajax in 1995 and the Double with Arsenal in 1997-98, has made no secret of his admiration for the player.

But he revealed: "We couldn't have a discussion with the player as Chelsea have a co-operation agreement with Vitesse and were first choice.

"The important thing for the player is that he gets minutes in the first team. Hopefully the deal goes well and he will get into the team."

A Chelsea spokesman told BBC Sport: "We have a good relationship with them [Vitesse], as we do with many other clubs."

340 comments
Back to top
unknown