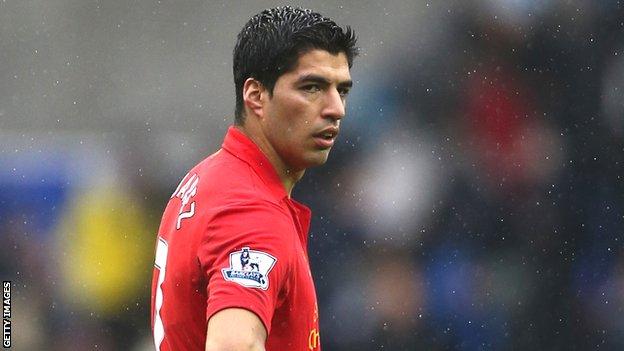 Suarez, 26, has been linked with Real Madrid, while the Reds have brought in Sevilla midfielder Luis Alberto and Celta Vigo striker Iago Aspas.

"The last thing you want is an unhappy player and Liverpool know that," Molby told BBC Radio Merseyside.

"They've been busy in the market and it appears they're almost readying themselves for life without Suarez."

Molby, who played 292 times for Liverpool between 1984 and 1996, continued: "I think he's made it pretty clear that he would like to try something new, including playing at a club that's in the Champions League.

"If that's how he feels, the club has to do the business."

Uruguay international Suarez, who scored 30 goals for Liverpool last season, said in May that it would be a and admitted it would be to Madrid.

Liverpool quickly However, if he remains at Anfield, the former Ajax forward will miss the first six matches of the new season after being for biting Chelsea's Branislav Ivanovic.

Manager Brendan Rodgers has made four summer signings so far, including and

There is also speculation linking goalkeeper Pepe Reina with a move away from Liverpool, which has heightened following the arrival of

"I'd be surprised if both of them were here on 1 September," said Molby. "Could you imagine Mignolet wanting to come to Liverpool and not play? He has his own ambitions and one of them is to be part of a very exciting Belgian national team.

"The fact we've signed another goalkeeper now - is it to increase competition for places? I don't know.

"In the first three or four years Pepe was here, he was as good as the club's ever had and as good as there was anywhere in the world.

"He hasn't quite been the same in the last couple of years, but I think he's a great goalkeeper. Possibly the time has come for him to move on, and if there's an opportunity for him back in Spain, so be it."