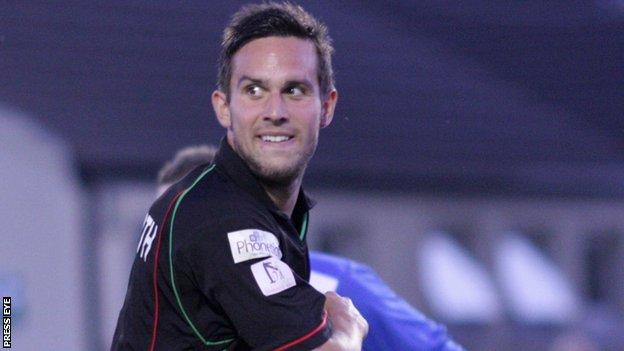 Linfield will be without their new striker Andrew Waterworth for six to eight weeks because he has sustained a broken bone in a leg.

Former Glentoran striker Waterworth limped out of Wednesday's Europa League win over IF Fuglafjordur shortly after scoring in his side's 2-0 away win.

Linfield manager David Jeffrey said it was a disappointing setback.

"He scored a great goal on Wednesday and was showing why we brought him to the club," said Jeffrey.

"It seems the curse of new signings sustaining injuries after joining us is continuing.

"Andrew has been limping badly and has been in quite some pain.

"He has been electric in training and showed his class and quality in scoring a great goal in midweek."

Linfield's second leg against the Faroe Islands side is at Windsor Park on Wednesday.

The 2-0 win in Torshavn was only Linfield's second away win in Europe and if they go through they will play Greek side Skoda Xanthi in the second qualifying round.