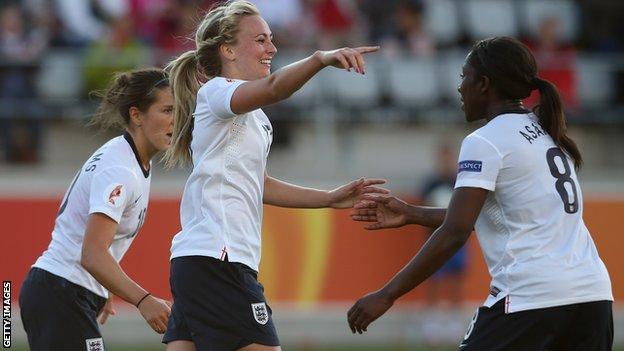 Jill Scott hit the post for England early on but Nelli Korovkina headed in following a deep cross to give Russia the lead before the break.

It looked all over after Duggan hit the bar late on but she then turned a shot into the corner in stoppage time.

England will probably need to beat France in their last group game if they want to reach the quarter-finals.

It is a huge demand heading into Thursday's Group C game as they have never beaten them under the current England coach Hope Powell, who has been in charge since 1998.

With three groups of four teams at Euro 2013, the top two in each qualifies for the quarter-finals and will be joined by the two best third-placed teams.

Until the final fixtures in Group A and B are completed on Tuesday and Wednesday, England will not know the exact permutations ahead of Group C's last round of matches.

France are currently top of Group C and assured of a place in the last eight after they defeated Spain 1-0 in Monday's later game, Wendie Renard finding the net after five minutes.

Earlier on, Powell's side were again lacklustre for periods in their match after losing their opener to Spain.

They created plenty of chances, but there seemed to be a spark missing and lack of composure in front of goal, before substitute Duggan saved her side.

Russia, the lowest ranked team in the tournament, looked bright in the first 10 minutes with Olga Petrova having a header saved and Korovkina curling wide from 20 yards.

But for the majority of the first half, it was England who were in the ascendancy as goalkeeper Elvira Todua tipped Jill Scott's stinging shot onto the post and Steph Houghton headed wide from a corner, even though she was just six yards out.

Despite an injury to Rachel Yankey, who was replaced by Karen Carney after 17 minutes, England continued to probe and Alex Scott almost crowned her 100th cap with a goal shortly after the half-hour mark.

In front of crowd of 3,629 it looked like it was only matter of time before England made the breakthrough but then seven minutes before the break, disaster struck.

Elena Morozova's deep cross from the left caught England's backline out, and once it was touched to Korovkina by Elena Terekhova, the Russian slotted home from close range.

Any optimism England could take into the break was immediately punctured and they looked like they were still recovering at the start of the second half despite Ellen White going close at the back post from Carney's cross.

The Arsenal forward was completely unmarked just three yards out but could not get her effort on target as the ball struck her shin before flying wide.

Duggan replaced Houghton as England attempted to claw their way back into the game but were perhaps fortunate when Alex Scott survived a penalty scare when she appeared to clip Ekaterina Sochneva.

England were walking a fine line and introduced Kelly Smith, who has not played since injuring her shin for Arsenal in March, but she seemed to inject more urgency into Powell's side.

And just as it appeared England were on the verge of heading home, Duggan latched onto Smith's deflected cross and fired left-footed into the bottom corner from 12 yards.