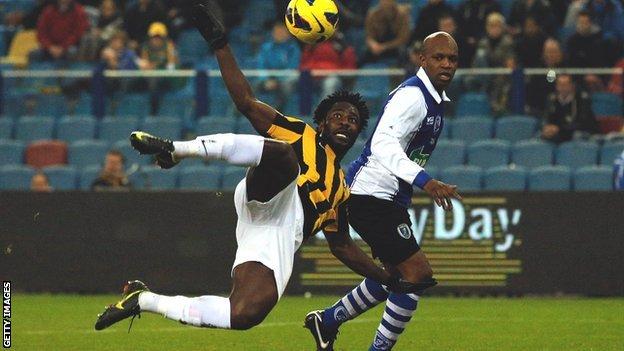 Swansea City have completed the club-record signing of Wilfried Bony from Dutch top-flight side Vitesse Arnhem for £12m, subject to a work permit.

West Ham also made an offer for the 24-year-old Ivory Coast international but Swansea won the race for his signature with a higher bid.

He said: "I've wanted to play in the Premier League for a long time."

The investment in the squad is a show of support for manager Michael Laudrup, who had said the Liberty Stadium outfit would have to strengthen for the 2013-14 campaign to build on last season's success.

Swansea won the Capital One Cup - beating Liverpool and Chelsea on the way to lifting the trophy - to qualify for the Europa League and finished ninth in the Premier League table.

Bony's arrival - in a deal that could rise depending on add-ons - is intended to take some of the pressure for goals off Swansea's Spanish attacker Michu, who scored 22 times for the club last season.

The pacy and powerful Bony was named Dutch footballer of the year for 2012-13 and had spells at Issia Wazi, in his homeland, and Sparta Prague before joining Vitesse Arnhem in January 2011.

He spent a brief period on trial at Liverpool in 2007 but failed to earn a contract.