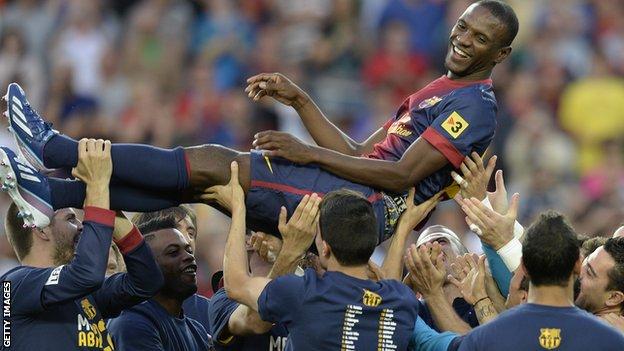 The France international, 33, made a playing comeback in April after having a liver transplant in 2012.

After what I've been through, it wasn't easy to find a club with confidence in me

But he was released by the Spanish champions at the end of last season after six years at the Nou Camp.

"It's very emotional, it's huge. After what I've been through, it wasn't easy to find a club with confidence in me," said Abidal.

Abidal, who plays either centre-back or left-back, started his professional career with Monaco and later played for Lille and hometown club Lyon.

He won the French title in each of his three seasons at Lyon before joining Barcelona for £10m in 2007.

Abidal was diagnosed with a liver tumour and underwent an operation in March 2011, but returned two months later to lift the Champions League trophy after Barca's victory over Manchester United in the final at Wembley.

He had a transplant in April 2012 with part of an organ donated by his cousin.