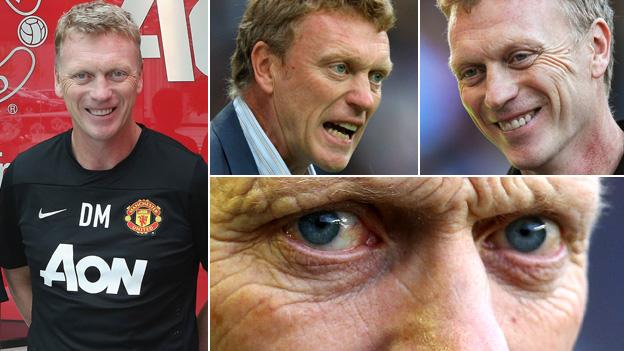 Hours after Everton's goalless draw with Liverpool on 5 May, then-Toffees boss David Moyes was in a pub in Preston buying his dad a pint.

He bumped into former North End team-mate Ian Bryson and the two men chatted for a while - just two old colleagues catching up. There was no hint of what was to unfold in the next few days.

By the end of the week Moyes would be unveiled as the new manager of Manchester United, signing a six-year deal to succeed Sir Alex Ferguson after the 71-year-old announced his retirement after 26 years in charge and recommended his fellow Scot as his successor.

It is a huge challenge, but one the new United boss has been preparing for all his working life.

Moyes's first significant foray into coaching was a four-year stint as assistant to manager Gary Peters at Preston in the mid-1990s - a side captained by Bryson.

And when Peters eventually stepped aside in 1998 to take over at the club's fledgling academy, he - much like Ferguson 15 years later - recommended to the board that Moyes should succeed him.

"He was always pushing the limits and I could not recommend him enough," Peters told BBC Sport. "Long before I took him on as my assistant he was taking notes all the time, every session.

"Even if you had asked me three or four years ago, I would have told you the only person who could take over from Sir Alex was David."

Moyes, now 50, had a modest playing career as a committed and durable central defender. After spells at Celtic and Cambridge United, he was signed by Terry Cooper for Bristol City as a 22-year-old in 1985.

"I was looking for a big no-nonsense centre-half and my word did I get one," said Cooper, a former England international full-back best known for his years at Leeds United.

"He just loved heading a ball. There was a big car park near Ashton Gate and he would insist I went out there with him after training and drop-kick balls so he could head them."

Cooper's son Mark, a former Peterborough manager and caretaker boss at Swindon, was an apprentice back then.

The youngsters would get changed in the away dressing rooms at Ashton Gate and Moyes was a familiar figure, regularly poking his head around the door and dragging them out to deliver crosses for him to head. In exchange he would help them work on their technical skills.

"Even back then he was thinking of the future, at a time when most lads were just living for the day," added Terry.

By the time Moyes was appointed assistant to Peters at Preston, a young local lad called Kevin Kilbane was starting to make an impression on the first-team squad at Deepdale.

"He was a big help to me, both on and off the pitch," said Kilbane, who went on to play under Moyes at Everton and won more than 100 caps for the Republic of Ireland.

"He was always willing to listen and take phone calls. The afternoon sessions I did with him were always technical, working on stuff like positional sense, what to do to beat a full-back, the little things that make you a better player."

Later, at Everton, what impressed Kilbane the most about Moyes was his preparation. Every time Kilbane took to the field he knew exactly what was expected of him.

"He is a winner, so methodical and precise in his approach," added Kilbane. "He goes beyond what I had at most clubs - that is why he has had success."

Moyes took Preston from the lower reaches of the third tier to the Championship play-off final before leaving for Everton in 2002. At Goodison Park he won the League Managers' Association Manager of the Year award three times and took a club that had finished in the top 10 just once in the decade before his arrival to eighth spot or better in nine of his 11 full seasons in charge.

When Kilbane followed Moyes to Everton in 2003 his old Preston coach was still taking virtually every first-team training session, including the warm-ups, and was involved in a lot of the individual sessions that followed.

"Being a manager is so complex that over the years he learned to take a step back," added Kilbane, who left Everton for Wigan in 2006. "When I have been back at Everton in recent years he has seemed more relaxed than during my early years there. That is down to experience and learning to trust his players."

Moyes's thoroughness extended to man-management. At Everton, Kilbane was a very rare visitor to Moyes's office, perhaps heading there once every few months, while others might find themselves in there once or twice a week.

"He knew how to treat people and how to get the best out of them individually," added Kilbane. "It is about keeping personalities happy, and no more so than at Manchester United."

Alan Irvine was his assistant at Everton for five and a half years and believes that one of the biggest challenges facing Moyes at Old Trafford will be team selection - and the balancing act of keeping a large squad of proven internationals happy. Irvine, now back at Everton heading the club's academy, remembers lengthy discussions as Moyes went over selection options with his staff.

"Sometimes he had decisions to make but that would be over one or two positions," said Irvine. "With a couple of injuries or suspensions the team often picked itself.

"He never had the depth of squad he does at United and he is going to have a situation where he has lots of good players sitting in the stand."

Moyes has always been conscious of the need to keep his players stimulated, working with his coaching staff to introduce varied and interesting sessions. The same has applied to the sports science department.

The men who know Moyes

Mick Rathbone worked with Moyes for 15 years at Preston and Everton, and describes Moyes as very forward thinking and open minded, but also a manager with very strong opinions.

"He had this thing where every summer we had to introduce something new - whether it be a piece of kit, a new recovery system or new methodology," Rathbone told BBC Sport.

"The idea was that when the players came back they could see we had moved forward and it would inspire them."

Rathbone left his position as Everton's head of sports science suddenly in May 2010 after a season in which key players including Phil Jagielka and Mikel Arteta had suffered serious injury setbacks. His long association with Moyes obviously counted for little when the manager analysed the situation. Moyes thanked Rathbone for the work he had done in two rather perfunctory paragraphs on the club's website.

Yet Rathbone reckons Moyes was great to work for and very fair. Kilbane describes him as loyal and intense. And Peters, who says he spotted early on at Preston that he and Moyes shared the same driven, hard-working approach, reveals that in order to create the right balance among the coaching staff, the Scot brought in Steve Harrison, a respected figure well known for his sense of humour.

Irvine believes that whatever happens to Moyes at United - and, like everyone interviewed for this article, he thinks the Scot will succeed at Old Trafford - his former boss will not change.

"His man-management skills are first class. David Moyes is one of the most driven and focused people I've met in football. His knowledge of the game is superb and tactically he's one of the best I've seen. I cannot speak highly enough of him."

"First and foremost he is a nice man," said Irvine. "That is important to him and he treats people extremely well. He spent a lot of years forming the character and personality he has got and I would be astonished if that changed in a short space of time."

But Irvine acknowledges that Moyes will have to adjust to the added expectation that comes with managing such a big club. Finishing sixth was a successful season at Goodison, seventh still good, eighth not too bad. "At United you have got to be first," said Irvine. "He has got to be close to winning everything he goes into."

There are undoubted question marks. Moyes has never won a major trophy, his experience of managing in the Champions League is limited to an unsuccessful qualifying-round tie against Villarreal in 2005 and he is shopping for the first time at the very top end of the transfer market.

"At the level David Moyes is at now, it is all about those kinds of fine margins," said Kilbane.

"But I have known him for 20 years and I believe he does have everything [to succeed], the work rate and desire, but also a fine character and personality."