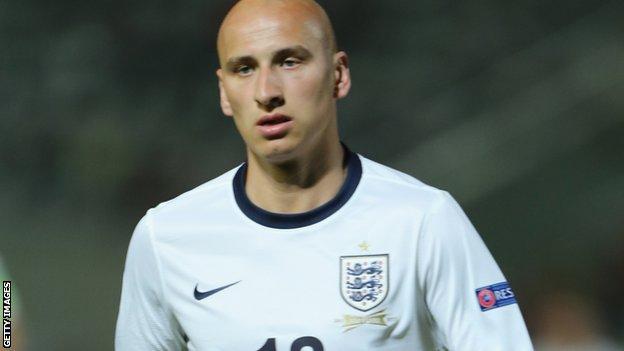 The 21-year-old midfielder signed a four-year contract after leaving Anfield in a £5m deal last week.

Shelvey made only 17 Liverpool league starts after arriving from Charlton for £1.7m in 2010.

"I spoke to Joe Allen just before I signed and he had nothing but good things to say about the club and the fans," said Shelvey.

When I spoke to the Swansea chairman, he said they had been tracking me from my Charlton days. I also heard of a link when Joe Allen was going to Liverpool, but that never happened.

"Brendan Rodgers and Colin Pascoe were exactly the same."

Wales midfielder Allen, born in Camarthen, left Swansea when he completed his move from Swansea to Liverpool in August 2012.

Liverpool manager Rodgers managed the Swans for two years before moving to Anfield in 2012, while his assistant Pascoe came with him - having also has two spells at the club as a player.

Shelvey, who had been linked with a move to Crystal Palace, is Swansea's sixth permanent signing of the summer.

He played 45 minutes in both friendly victories over FC Gravenzande and Excelsior on their pre-season tour of Holland.

The midfielder, who made his England debut against San Marino in October 2012, admits he has been struck by the passion of the Swans faithful since he arrived in South Wales.

"Less than two hours after I had agreed to sign, people were coming up to me in the local Sainsbury's in Swansea for autographs and pictures," said Shelvey.

"When I spoke to the Swansea chairman [Huw Jenkins], he said they had been tracking me from my Charlton days. I also heard of a link when Joe Allen was going to Liverpool, but that never happened.

"It raised its head again over the summer and I was following it in the papers every morning while on holiday until it happened for real.''

Shelvey, who has played European football with Liverpool, is relishing Swansea's entry into the Europa League this season.

"It's exciting for the fans and I'm sure the atmosphere will be buzzing at the Liberty for the night games.

"It will also give the players experience of going to different countries and facing different styles of play.''