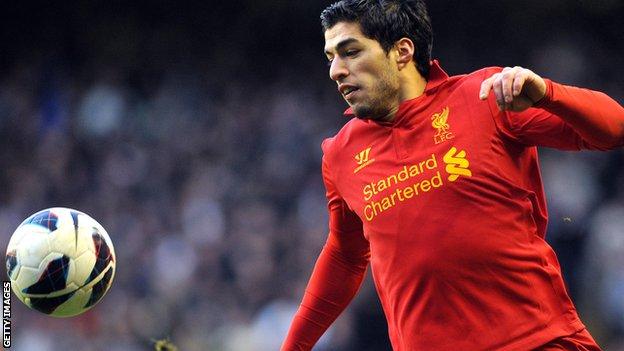 Pere Guardiola travelled to Merseyside and held separate meetings with Rodgers and Ayre, which were planned and understood to be amicable.

Liverpool have insisted their position has not changed and they want to keep the 26-year-old striker, while Guardiola has not submitted an official transfer request on behalf of Suarez.

Suarez is currently on an extended break after playing for Uruguay in the Confederations Cup in Brazil.

The player, however, has given a series of interviews this summer in which he has expressed his desire for Champions League football and it is believed Guardiola relayed that message again to Liverpool's hierarchy in Monday's discussions.

Liverpool have already rejected a £30m offer from Arsenal for Suarez, who has spoken publicly this summer about his disenchantment with life in England and what he regards as unfair treatment from the media.

Suarez, who is currently serving a 10-match suspension for biting Chelsea's Branislav Ivanovic at Anfield last season, has been consistently linked with a move to Real Madrid.

It would take an offer close to the £50m Liverpool received from Chelsea for Fernando Torres in January 2011 to make them even consider selling the forward.

The Merseyside club, however, have established a close working relationship with the highly respected Guardiola, brother of Bayern Munich coach Pep Guardiola, during Suarez's troubled time at Anfield and have not given up hope that he will resume his career in the Premier League once he has served his ban.

As yet, there has been no firm expression of interest in him from Real Madrid, with Arsenal having made the only firm move, although Chelsea have also been touted as considering a bid for Suarez.

And, given his repeated complaints about his life in England, it would be a surprise if he even considered staying in the Premier League - and if Liverpool would consider selling Suarez to another English club.