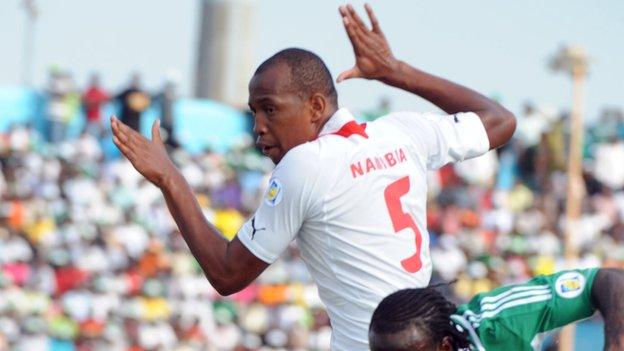 Namibia became the first country to advance past the first stage of the Cosafa Cup when they beat the Seychelles on Monday, while Kenya fought back to draw with Lesotho.

The Brave Warriors' 4-2 victory was their second win of the tournament in Zambia and secured top place in Group A.

They had beaten Mauritius 2-1 on Saturday in the opening game of the tournament and now advance to a quarter-final meeting with South Africa.

Kenya scored twice in the last six minutes to draw their opening game in Group B after trailing plucky Lesotho at the Arthur Davies Stadium in Kitwe.

The 2-2 draw means there is a four-way tie at the top of the standings.

Lesotho were on their way to a historic first-ever win after taking a two-goal lead - a penalty two minutes before half-time from Mokhahlane Ralekoti gave the Basotho the lead, followed by a goal on the counter attack by Thapelo Tale.

But a header from substitute Paul Muigai in the 84th minute halved Kenya's deficit and the Harambee Stars won a penalty - awarded for a handball - and Joackins Atudo converted for a share of the spoils.

At the Nkoloma Stadium in Lusaka, the crowd were treated to a six-goal thriller in which the lowly-ranked Seychelles, 200th in the latest Fifa list, twice taking a surprise lead before going down in a fighting contest.

Striker Yves Zialor scored twice for the Indian Ocean islanders only to see Namibia equalise on both occasions to ensure the scores were even at the break.

Zialor's header gave them a 14th-minute lead but a goal from a tight angle by Sadney UriKhob gave Namibia an equaliser 11 minutes later.

A piece of calamitous goalkeeping them gifted Zialor a second goal in the 38th minute but this time the lead lasted only two minutes before Ananias Gerhardt levelled.

Gerhardt then put Namibia ahead only one minute into the second half before Neville Tjiueza extended the winning margin with only two minutes remaining in the match.

Seychelles pressed hard in the closing stages, opening up the chance for a series of Namibian counter attacks which were surprisingly squandered.

On Tuesday, there are two Group A matches, Botswana v Lesotho and Kenya v Swaziland.