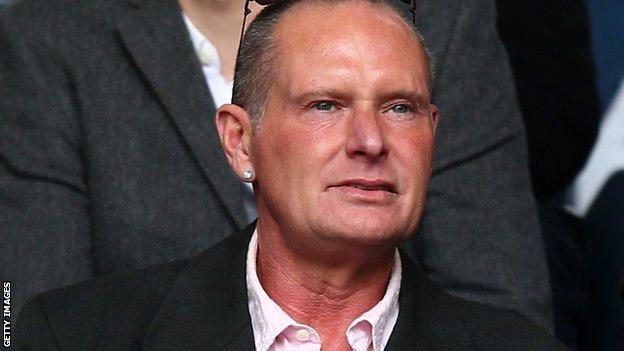 Former England cricketer Ronnie Irani has urged people not to lose patience with Paul Gascoigne after the ex-football star was reportedly involved in a drunken disturbance on Monday.

Gascoigne was taken to hospital after police were called to a London hotel.

Irani helped pay to send Gascoigne, 46, to an alcoholism-treatment clinic in the United States earlier this year.

"People feel they have been let down by Paul but you must always keep trying," Irani, 41, told BBC Radio 5 live.

He has to make his own choices. It's down to him - but this disease tricks you

"Never give up on anybody. I can understand that [people have lost patience] because there are people out there who haven't had the chance that Paul Gascoigne has had to fly to Arizona.

"But for me he is a different case because of the public reaction to him.

"Everyone wants a piece of him and he gives it them because he is a nice guy. People take chunks out him and he allows that."

Irani, along with some of Gascoigne's celebrity friends, including television presenter Chris Evans and ex-Tottenham and England team-mate Gary Lineker, funded his trip to the clinic in Phoenix in February.

"We were told it would be tough for him to get out there because it cost a lot of money. But money was irrelevant - we just wanted to help him out," said ex-Essex player Irani, who met Gascoigne on the after-dinner speaking circuit.

"We knew the stats were going to be against us. According to the experts, one in 10 recover from alcoholism. It's a horrible disease."

But Irani admitted he fears for Gascoigne's life after the former England midfielder was taken to hospital on Monday.

Police confirmed they were called to reports of a man causing a disturbance at a hotel in Russell Square and that the man was taken to hospital by ambulance.

The latest incident came days after Gascoigne's arrest over an alleged drunken assault.

"Are we surprised [that Gascoigne is reportedly drinking again]? No. It's sad. But we just hope and pray he can get through it again," said Irani.

"He has some good people around him. People have a go and say 'where are his real friends?' and you shake your head.

"He has got some top people around him but he has to make his own choices. It's down to him - but this disease tricks you."