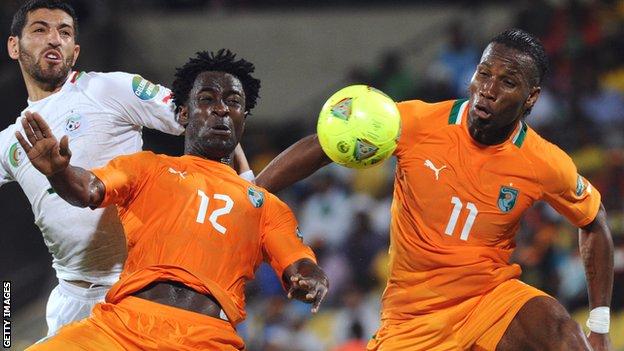 Drogba scored 157 goals in a trophy-laden eight-year spell at Chelsea.

"It's a big inspiration for me. He had a big career in the Premier League," said Bony, 24, who has joined Swansea for a club record fee of £12m.

"I think in football anything is possible and I hope to do the same, or more. We will see."

A scoring record of 31 goals in 30 league appearances last season for Vitesse Arnhem convinced Swansea to double their previous outlay for a player.

Bony, an Ivory Coast international, insisted he will be unfazed by the price tag that accompanies him to south Wales and revealed he sought Drogba's advice before deciding to join the club.

"He said they were a good team, that they play very good football and not many teams in England play like them," he said. "He thought I was making a good decision to join them.

"I have to listen to his advice and try to do my best and hope that everything will be okay.

"He congratulated me and said he was proud of me. He said I have to work more now because there is one level more [to reach] but he knows I can do it if I believe."

Swansea were among a number of clubs to show an interest in signing Bony, with West Ham United also submitting a bid.

But the striker, who had a trial with Liverpool in 2007, said he was impressed by Swansea's pursuit, saying they were the only club to be "serious".

"It was a very long process but I'm happy everything is done now," he added.

"I can forget about that and just think about the team and be ready."