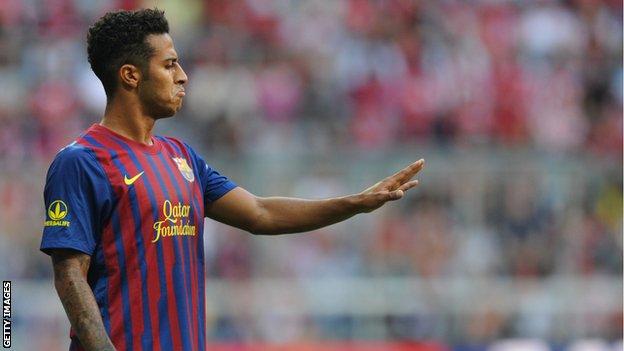 The Spanish playmaker, 22, was handed his Barcelona debut by Guardiola at the age of 18 in May 2009.

To say Thiago comes from a footballing background is an understatement: his father Mazinho was a Brazil international who won the World Cup in 1994 and his younger brother Rafael - better known as Rafinha - is another product of the Barcelona academy who has made a handful of first-team appearances so far.

The 22-year-old is an astonishingly adept technician, possessing a sublime first touch and all the flicks, tricks, stepovers and turns in the book. He's also a wonderful passer, albeit occasionally a little too ambitious, and has long been regarded by Nou Camp insiders as Xavi's natural heir.

Guardiola said: "It is either Thiago or nothing.

"I don't know what's going to happen. We have to wait. But I know him very well. He is a super, super player."

"He can play in three, four or five positions," he added.

Guardiola is hoping Thiago will leave Spain's La Liga champions to increase his chances of making next summer's World Cup.

Thiago captained Spain to the European Under-21 Championship in June and scored a first-half hat-trick against Italy in the final.

He is said to have a £15.5m release clause at Barcelona.

Borussia Dortmund striker Robert Lewandowski is also expected to join the Bundesliga champions at the end of the season on a free transfer.