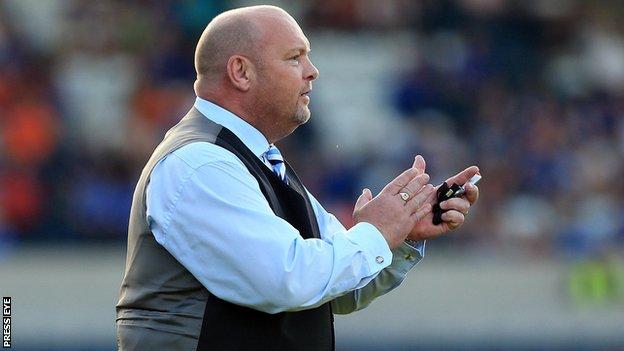 Linfield manager David Jeffrey hailed his history-making players after they cruised into the second qualifying round of the Europa League.

Wednesday's 3-0 victory over IF Fuglafjordur ensured a 5-0 aggregate win as the Blues secured their first ever double win in a European tie.

"I am massively proud of the players," Jeffrey told BBC Sport after the win over the Faroe Islands club.

"They had a superb attitude and there was great hunger."

Michael Gault headed the hosts ahead just before the break before second-half strikes from Jamie Mulgrew and Philip Lowry secured a comfortable win.

Linfield's reward is a qualifier against Greek side Skoda Xanthi and while Jeffrey describes the logistics of travelling to Greece as a "nightmare", he says that it's a "nice problem to have".

The Blues will take on the Greeks away next Thursday with the second leg scheduled to take place at Windsor Park on 25 July.

"I wanted a result first and foremost and I also wanted a performance," added the delighted Blues boss.

"I thought we played very well. I thought Michael Gault was absolutely magnificent.

"One minute he's making a block tackle and the next he's scoring a goal.

"But everyone was working hard for reach other," added Jeffrey, who also picked out the performances of goalkeeper Jonathan Tuffey and Billy Joe Burns.

"The new players contributed very well and those who have served the club very well stepped right up to the mark again."