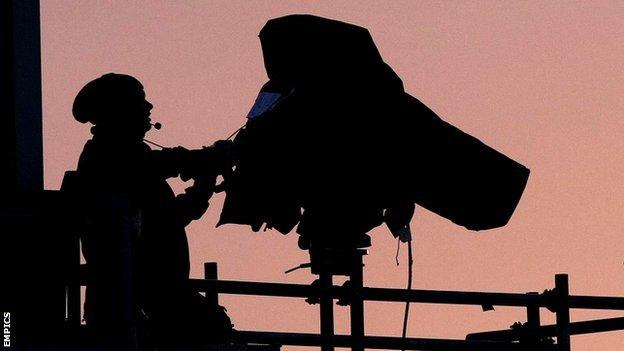 Sky have signalled their intent to tackle new rivals BT head on in the battle for audiences, advertisers and subscribers with the publication of the broadcast schedules for the start of the Premier League season.

It was June last year when BT's ambitious plans to take a slice of Sky's sports broadcasting market were revealed with the announcement of the outcome of bidding for the Premier League TV rights to 2016.

BT swept away all other opposition, committing more than £730m for its share of the rights, 38 games per season over the next three years.

In addition to Sky's investment of £2.2bn for 116 games a year, it meant the Premier League was able to wallow in an extraordinary and unexpected 70% increase in its domestic rights income. For the TV companies, content is king, and BT - having invested heavily in fibre optic technology - clearly needed some big attractions to help recoup its spending.

Sky built its business model around the acquisition and exploitation of sports rights, and now BT is doing the same. Its football portfolio includes the FA Cup and Scottish Premier League, plus Italy's Serie A, the German Bundesliga and France's Ligue 1 among others. It also has rugby union's Aviva Premiership, WTA tennis, Moto GP and Major League baseball in its growing portfolio.

The battleground extends way beyond just the Premier League, into broadband, telephony and digital services, and BT is going after all areas aggressively.

In determining the scheduling of the opening games of the Premier League season, Sky has shown clear strategic intent, using its status as prime partner to pepper the opening weekends of the season with matches involving the top four clubs.

"BT has spent a fortune buying the rights to enable it to launch its sports channel, and hiring big names to front it. So how will it recoup its investment if it's now going to make BT Sport free to its broadband customers?

The answer is it won't - in the short term at least - but that's not the aim.

This is all about reinforcing BT's broadband business and making its customers less likely to head elsewhere."

Sky has 20 first-choice games compared with BT's 18 over the season. That small numerical advantage essentially allows it to make the running. Its primacy allows it to decide when to take those first picks, and it has clearly gone out to make an early impact.

Sky will show the first matches of new managers David Moyes, Manuel Pellegrini and Jose Mourinho, and has already announced that on the first Saturday of the season, 17 August, its programming will be free to air.

BT does get the honour of showing the first game, Liverpool against Stoke, at 12:45 BST, but it will be the second week in September before it gets to showcase the champions, Manchester United. It does however have Spurs versus Chelsea on 28 September, and the first Merseyside derby of the season in November.

The complex matter that is the pecking order of game selection depends on the packages bought at the last rights auction, which brought the astounding leap in revenues to the Premier League. BT is a major player, but Sky still has the edge in terms of the number of second and third picks.

Some might see risk in Sky's strategy of going for a big impact early, and using a number of those precious first picks to front-load the season. That's the way BT will want to present it: it has only used five of its first picks in the weeks to the beginning of December, perhaps leaving it better placed for the season denouement.

Sky is adamant that it is no more disadvantaged overall than when ESPN and Setanta were rivals, and that its portfolio of games is as strong as ever. ESPN, though, did not have any first picks - BT most definitely does.

There is a great deal of marketing and spin going on, of course. Amidst all that, the Premier League is saying nothing, but its rules also have a substantial influence on the schedulers.

Broadcasters have an obligation to tell the story of the season, and reflect the whole league competition, not just focus on the top four. There are limits on the minimum, and more importantly, maximum numbers of games they can show of any one club, and they have to feature the three promoted teams by the end of August.

BT has spent big and gone out hard in its bid to become a serious rival to Sky. On the face of it, the incentives and price war look good for consumers, but the landscape remains complex and diehard armchair fans will still need parallel BT and Sky contracts if they want to remain in full control of what they see.