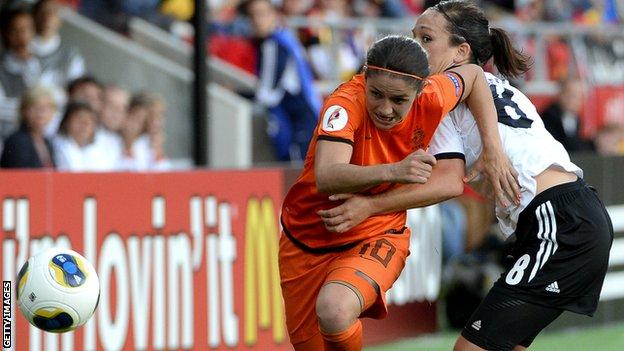 Defending champions Germany were held 0-0 by the Netherlands in their Euro 2013 opener in Sweden.

Germany, who have won the last five tournaments, went close when Dzsenifer Marozsan shot wide with only keeper Loes Geurts to beat.

But German keeper Nadine Angerer had to make a fine save from Dutch winger Lieke Martens's 30-yard strike.

In the other Group B game, Iceland scored a late penalty to secure a 1-1 draw with Norway.

Margret Lara Vidarsdottir scored the 87th-minute spot-kick after she was blocked by Marit Christensen. Her goal cancelled out Kristine Hegland's 26th-minute opener.

Germany's stalemate ended a run of 19 straight wins at the European finals.

They dominated possession and missed early chances when Celia Okoyino Da Mbabi and Leonie Maier failed to hit the target from close range.