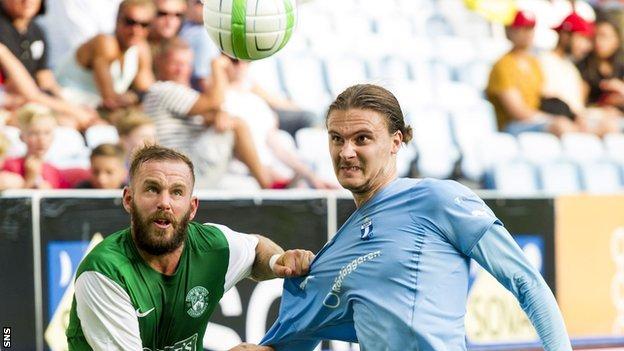 Hibernian will need to overturn a two-goal deficit to progress in the Europa League after losing to Malmo in the second qualifying round first leg.

Strikes by Jiloan Hamad and Magnus Eriksson put the hosts two up within the opening 13 minutes.

Hibs came close to an away goal when Rowan Vine's shot rebounded back off a post.

Malmo also hit the frame of the goal with Tokelo Rantie firing against the bar after the break.

The two sides meet for the return leg at Easter Road next Thursday.

Owain Tudur Jones glanced a header over from fellow Hibs debutant Liam Craig's free-kick before the Swedish side took control.

Visiting captain James McPake was booked for a foul on Rantie and, from the resulting free-kick, Hamad fired over the wall and past Ben Williams.

And, within a matter of minutes, Malmo had doubled their lead as Emil Forsberg pulled back for Eriksson to apply the finish.

Hibs were toiling with Simon Thern, son of former Sweden captain Jonas, impressing for the hosts in midfield.

However, Vine almost changed the complexion of the tie with a long-range drive against the post.

Malmo re-asserted themselves with Markus Halsti and Eriksson forcing saves from Williams.

The goalkeeper made another important block in the opening seconds of the second half after Rantie found himself clear of the Hibs defence.

The Allsvenskan league leaders seemed determined to all but finish the tie and both first-half scorers were denied by Williams before an important challenge from Kevin Thomson frustrated Rantie.

Another effort from Rantie smacked off the bar moments later.

Ross Caldwell replaced Vine after Alex Harris had take the place of Thomson as Pat Fenlon sought to freshen his side up against a team midway through their domestic season.

The visitors knew a goal would provide a major boost ahead of the second leg but Johan Dahlin remained relatively untroubled in the final 20 minutes, with Tom Taiwo's effort from distance comfortably gathered by the Malmo keeper.

48 comments
Back to top
unknown