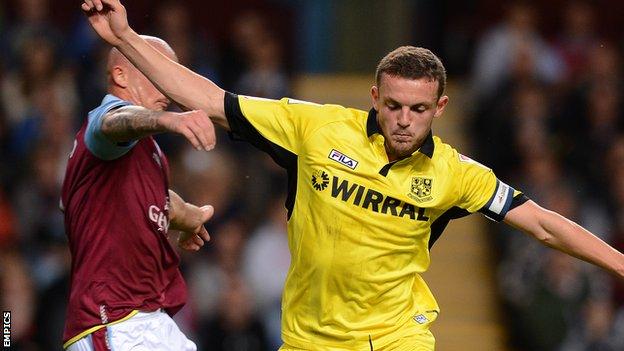 Tranmere captain James Wallace is confident of returning to action on the opening day of the season after missing most of last term because of injury.

The midfielder, 21, has been out since December because of a knee problem.

Wallace aims to make his comeback in a friendly at Wrexham on 27 July and hopes to be involved in their League One opener at Walsall on 3 August.

"Hopefully I'll be firing on all cylinders by the first game of the season," he told BBC Radio Merseyside.

Wallace, who joined Tranmere on a permanent basis from Everton last summer, starred as Rovers flew to the top of the table early in 2012-13.

Tranmere skipper James Wallace played 23 games for Rovers last season - 14 of them ended in victories for Ronnie Moore's side.

His injury, suffered in an FA Cup tie against Chesterfield, was but complications during his comeback prevented him from featuring again.

The absences of Wallace and other key first-teamers contributed to Tranmere's subsequent slide down the table, with the remaining group of primarily young players unable to keep Ronnie Moore's side in promotion contention.

Summer arrivals such as striker Ryan Lowe and centre-back Stephen Foster have been brought in to add experience, while

The 33-year-old, who began his career at Tranmere before making big-money moves to West Bromwich Albion and latterly Wigan Athletic, has not made a league appearance for two years.

But Wallace is excited at the possibility of lining up with the former Wales international, adding: "He'll give everyone a lift - the fans and the players, especially playing alongside someone such as him.

"He's building his way back in and it's going to take him a few weeks to get fit, but there's no doubt that he would be an excellent talent for us."