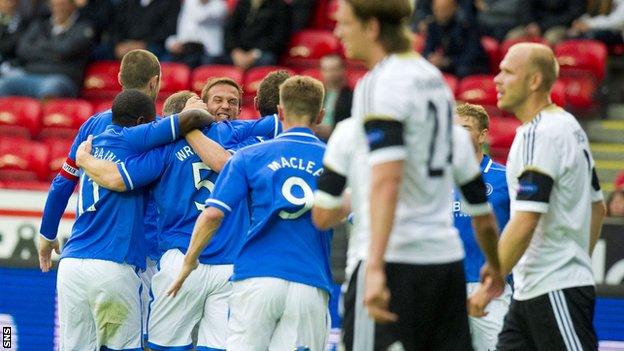 Wotherspoon went close in the second half and the visitors worked hard to prevent an equaliser.

Rosenborg, with home advantage and midway through their domestic season, had threatened early when Nielsen cracked a low shot just wide.

But Tommy Wright's St Johnstone looked more than capable either side of Wright's crucial goal.

Mannus then made a magnificent save to deny Nielsen from six yards, the stopper instinctively throwing a boot out to block the effort.

Saints almost moved further ahead straight into the restart. Wotherspoon's chipped shot took a deflection and Orlund dived to his right to palm away for a corner.

MacLean then fired narrowly wide of the keeper's left-hand post as the visitors kept the pressure on.

Rosenborg's Daniel Berntsen volleyed from 20 yards but Mannus blocked well and, a minute later, used his feet to deal with another of the midfielder's attempts.

Sandwiched between those chances for the hosts, Chris Millar fired just wide for St Johnstone as the game raged from end to end.

Mannus was called into action again to deny further efforts from Mike Jensen and Berntsen.

Saints weathered some serious pressure as the game neared its end but were always threatening in attack with Gwion Edwards rattling a shot over the bar in the last few minutes.

And the Scottish top-flight outfit held on to record a stunning victory against a team who outgun them financially by a huge margin and St Johnstone now have a decent chance of progressing in the competition.

The two sides meet again at McDiarmid Park for the second leg next Thursday.