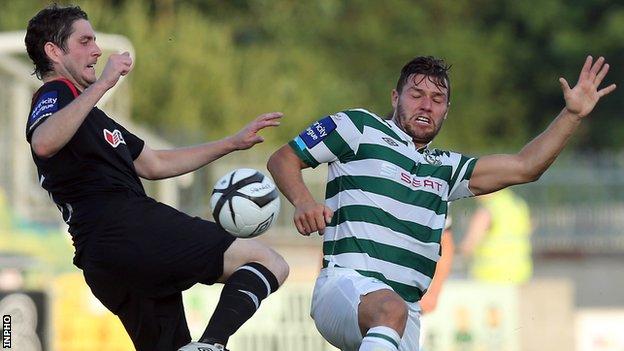 Rovers bossed the first half with O'Connor volleying them into the lead on 38 minutes.

Rafter levelled from the spot on 49 before O'Connor's 52nd-minute winner.

Rovers handed a competitive debut to former Derry striker Eamon Zayed who had left the Brandywell outfit after the 2011 season to move to Iranian club Persepolis.

Paddy Kavanagh flashed an early Derry shot wide but it proved to be their only attack of note in the Rovers-dominated opening period.

At the other end, Billy Dennehy just failed to connect with a Ronan Finn cross in the 14th minute with former Derry favourite Ken Oman then heading wide on 26 minutes.

Derry keeper Gerard Doherty denied Finn on 34 but O'Connor lashed Rovers into the lead four minutes later with a superb left-foot volley from just outside the box.

The visitors had Barry Molloy and Shane McEleney booked just before the break but after Barry McNamee had missed a chance to equalise after the restart, they did get on terms a minute later from Rafter's penalty.

The spot-kick was awarded after Dennehy had felled Derry debutant Eoghan Osbourne.

But Derry only remained on terms for three minutes with O'Connor curling in another superb Rovers goal from the right corner of the penalty area.

Derry rarely threatened to snatch an equaliser in the final 42 minutes of action.

Rovers continued to threaten with Dennehy blasting a glorious chance wide and Finn then striking the Derry woodwork on 86 when he only had Doherty to beat.

Victory would have moved Derry level on points with leaders St Patrick's Athletic but Declan Devine's side remain three adrift having played a game more than the table toppers.

Pat's have a chance to go six clear in Sunday's away game against champions Sligo.