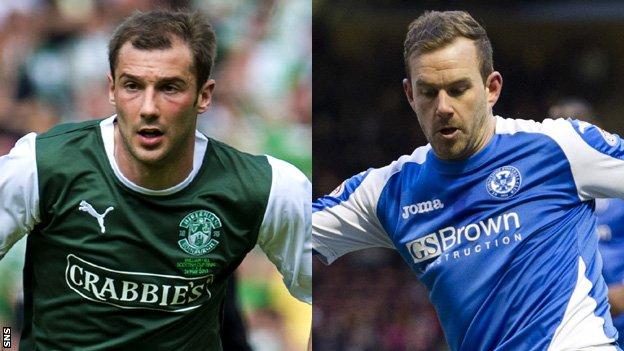 Thomson returned to his first club in March after being released by Middlesbrough, playing for free till the end of the season.

"I'm really pleased to have agreed a deal - I always wanted to stay here," said Thomson.

"There were other offers on the table from clubs down south, but I knocked them back because I had my mind set on staying with Hibs."

Vine, who scored twice for St Johnstone on his last visit to Easter Road, also told the club's official website of his delight at signing for Pat Fenlon's side.

"I enjoyed playing in Scotland last season and when my time at St Johnstone came to an end I was keen to stay in the league," he explained.

"As soon as the opportunity came up, I wanted to take it because it's clear to me this is a club heading in the right direction and I want to be part of it."

Fenlon is pleased to have secured the duo for the upcoming season.

"Both Kevin and Rowan are exactly what we need - quality players with plenty of experience," said the manager.

"Overall, we've got a young group of players and, with their combined experience, Kevin and Rowan will play a big part in the continued development of our squad."