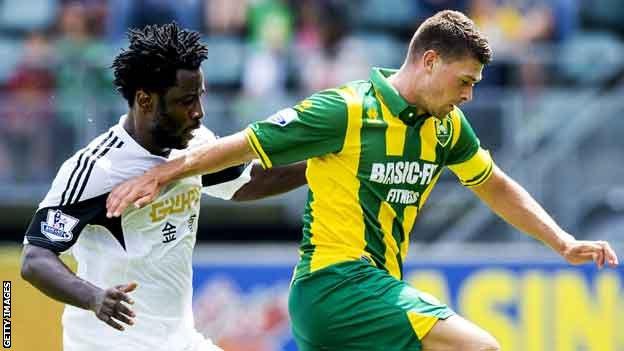 Club-record signing Wilfried Bony made his Swansea City debut as Wayne Routledge's goal earned them a 1-0 win against Den Haag.

Bony, 24, who completed his from Vitesse Arnhem on Thursday, came off the bench at half-time.

But he was not able to mark his first appearance in Swansea colours with a goal.

Routledge's strike midway through the first half was enough for the Swans to end their Netherlands tour with a win.

Bony showed flashes of his ability but was foiled by the Dutch side's goalkeeper Gino Coutinho on two occasions.

Instead the Swans' matchwinner was the former Tottenham and Crystal Palace winger Routledge.

He scored the only goal of the game, scooping the ball over the keeper after a defence-splitting pass by Jonjo Shelvey in the 21st minute.

Shelvey, impressed in the first half and almost doubled their lead minutes later when he attempted an audacious lob from just inside the Den Haag half.

But the ball landed on the roof of the net as Coutinho scrambled back towards his line.

Michael Laudrup's Swansea side were largely untroubled in the first 45 minutes, with goalkeeper Gerhard Tremmel not required to make any saves.

After the break their opponents finally produced a first shot on target, but Ninos Gouriye could only find the 34-year-old German's gloves.

Bony's introduction increased the expectation from a relatively large crowd, and their desire to see him score was almost fulfilled late on, but Roland Lamah over-hit his pass as the Swans broke.

The Swans now return home to continue their pre-season preparations with a friendly at Championship new boys Yeovil on Friday, 19 July.